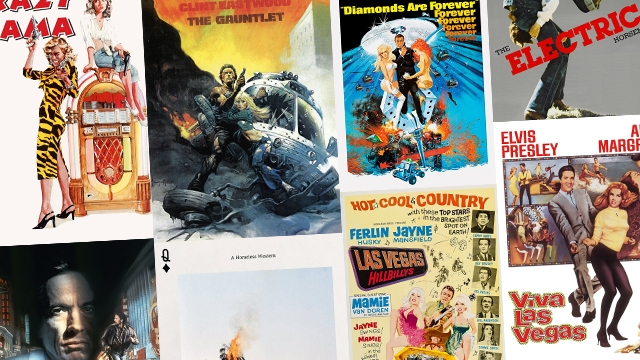 By Chris Steffen
Sure, Las Vegas has been in the spotlight in plenty of movies, like Ocean's Eleven and its remake and sequels, Terry Gilliam's Fear and Loathing in Las Vegas, Nicolas Cage's Oscar-winning turn in Leaving Las Vegas, Nicolas Cage's less-awarded (but still nominated!) turn in Honeymoon in Vegas, and Nicolas Cage surviving a plane crash in Vegas in Con Air. Over the past several months, I've watched a handful of movies that have taken a different look at Vegas, beyond the supposed glamour of the casinos and bright lights of the Strip. Let's take a trip to the sun-bleached outskirts, the dingy off-Strip gambling halls, and off-limits penthouses of weird Vegas.

In The Gauntlet, Clint Eastwood plays a flunky cop tasked with transporting a crucial witness from Las Vegas to Phoenix (making the classic video game Desert Bus an unofficial adaptation of this movie). Instead of the glitter and glitz of the Strip, we spend the bulk of our Vegas time on the dusty desert outskirts of the city, watching our witness' house get absolutely shot to pieces (7,000 holes packed with squibs). There's a lot of crooked cops and mafia nonsense, and Frank Frazetta's goofy poster art actually comes pretty close to capturing the movie's over-the-top ethos.

Our review accurately notes that in Queen of Diamonds, "[director Nina] Menkes depicts Las Vegas as a surreal desert wasteland dotted by ruined buildings and ruined people," as she flips from the dilapidated, dreary apartment of a lonely blackjack dealer to the similarly grim confines of her brightly lit, cacophonous workplace. As could be expected from the sole art house film represented here, the narrative threads are more implied than overt, giving the feeling of a half-remembered dream that's not quite a nightmare but not altogether pleasant, either. This one gets under your skin. (Available on the Criterion Channel and Kanopy)

Sean Connery put the hairpiece back on for his penultimate turn as 007 in Diamonds are Forever, which finds him enraged and chasing down the nefarious Blofeld, who murdered Bond's wife at the end of the preceding film, On Her Majesty's Secret Service. In one of the most America-centric Bond movies, we end up in Vegas with car chases careening down a Strip lined with onlookers, and with lots of scenes at hotels owned by Howard Hughes, a friend of Bond producer Cubby Broccoli. Hughes himself is spoofed in the movie by the character of reclusive casino-dwelling billionaire Willard Whyte, and henchmen Mr. Wint and Mr. Kidd are two of the franchise's most memorable. (Available on Pluto TV)

Night of the Running Man

My personal favorite on this list, Night of the Running Man is a sweaty cat-and-mouse thriller starring Andrew McCarthy as an unwitting Las Vegas taxi driver who makes off with a briefcase of stolen money, while a menacing, Terminator-esque Scott Glenn is in pursuit. The action eventually moves on from Vegas, but while we're there, it definitely isn't the sexy side of Las Vegas: this is trailer parks, diners at train stations, off-Strip casinos, and those weird side roads that you still have to take to get to the airport. Bonus points for an especially savage scene at the nearby Hoover Dam. (Available on Prime Video)

In The Electric Horseman, Robert Redford plays a retired rodeo rider who has cashed in by becoming a brand spokesman, which requires him to make routine appearances at every one-stoplight town that the company can think of, regardless of how drunk he might be. Eventually he makes his way to Vegas for a promotional event, where he is to pose alongside a famous horse, which he ends up riding through the floor of a casino, out the front door, and into the desert. The jarring dichotomy of Redford -- in a fully lit up Nudie suit that gives the movie its name -- riding a horse past blackjack and craps tables is one of the film's most memorable images, and the similarly contradictory soundtrack puts Willie Nelson and disco side by side. (Available on HBO Max)

Here's where we get obscure. The Las Vegas Hillbillys is mostly an excuse for a series of country music performances from the likes of Connie Francis, Connie Smith, Sonny James, and Del Reeves, which are all excellent, and the narrative portion (something about inheriting an old casino and turning it into a country venue) stars musician Ferlin Husky, who can't resist contorting his face in bizarre, hyper-performative ways while singing. We also get appearances from Jayne Mansfield and Mamie Van Doren, Bond villain Richard Kiel (aka Jaws), and a grand pie fight.

Director Jonathan Demme's second movie, Crazy Mama stars the great Cloris Leachman at the center of three generations of women who go on a crime spree as they head to Arkansas from Los Angeles. They wind up stopping in Vegas, where they get up to all manner of mischief and mayhem as figures from their past life try to chase them down, all with a killer soundtrack and a keen appreciation for offbeat Americana. (Available on Tubi and Pluto TV)

Perhaps the most obvious film here, Elvis' Viva Las Vegas warrants inclusion for the eye-popping dazzle of its opening credits sequence, in which the title song is accompanied by stunning shots of 1963 Las Vegas. We also spend a good bit of time in the desert outside the city, which makes for a fun see-saw as we go back and forth from the parched, rocky outskirts to the early '60s lushness of the casinos, pools, and showrooms. (Available on HBO Max)

Honorable mention goes to Francis Ford Coppola's One From the Heart, which despite being set in Las Vegas, was mostly filmed on elaborate soundstages to achieve a highly-stylized, fantastical effect.