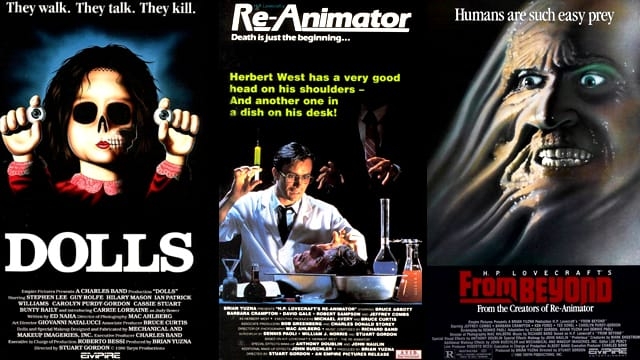 By Chris Steffen
The beloved cult director Stuart Gordon died on Tuesday, leaving behind a legacy of some of the most bizarre and creative horror films ever made. Fortunately, many of his best movies are currently streaming, making it easy to carve out some time to sit down and appreciate the strange visions and scenarios he shared with the world.

Gordon's directorial debut would also be his most renowned. He loosely adapted a selection of H.P. Lovecraft stories, establishing a pattern that would continue throughout his career, and distilled them into a simultaneously grisly and humorous tale about med students reviving dead bodies -- or parts of dead bodies -- and getting up to all manner of gross and kinky mischief. (Available on Showtime and Shudder)

While Re-Animator was the hit, From Beyond is the one that the cosmic horror hounds still praise as one of the best Lovecraft adaptations ever. An inventor in a remote laboratory develops a way to see between dimensions, revealing terrifying monsters just beyond our grasp but also potentially allowing them to enter our world. But that's just the premise, and things get even crazier from there. (Available on Pluto TV)

Before Anabelle, even before Chucky, there was Dolls. And while the mobile, possessed dolls rip and tear at the flesh of the unwitting, this time it's out of a sense of obligation to protect the innocent, putting a different spin on the standard "haunted toy" fare. (Available on Prime Video and Pluto TV)

Gordon set aside Lovecraft and took a story from the headlines for this Mena Suvari/Stephen Rea thriller. Suvari plays a retirement home worker who strikes a homeless man with her car, embedding him in her windshield. Panicked, she drives home and faces the various options available in the terrifying, no-win situation. (Available on IMDB TV and Shudder)

The whims of entertainment in the 90s didn't slow Gordon down from delivering the goods in his own way with Castle Freak, which brings Gordon and Re-Animator star Jeffrey Combs back together for the story of an American who inherits a castle in Italy, only to find that a monster has been kept beneath the property. It's only a matter of time before it escapes and blood is spilled, and the police refuse to believe the recovering alcoholic's stories about a rampaging beast. (Available on Tubi and Shudder)

While this one isn't streaming anywhere legitimately, it's worth knowing that it exists. Released in conjunction with DISNEY (yes, Disney got in business with the guy who made Re-Animator, but they also made a movie with David Lynch), this Ray Bradbury adaptation tells the story of five men who all chip in on a spiffy new suit that they think will change their lives. And it does, but not in the ways they expect. And what a cast: Clifton Collins Jr., Joe Mantegna, Edward James Olmos, and Sid Caesar himself all star in what sounds like mandatory viewing -- if you can find it.