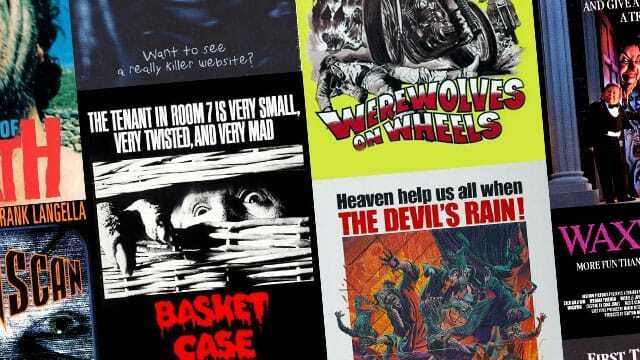 By Chris Steffen
Horror stands somewhat alone as a genre in that its failures are often as earnestly cherished as are its grand successes. For every chin-stroking thinkpiece about The Shining, there's also a misguided, objectively horrible movie about a haunted website that's probably being transferred to 4K right this second, and the two will sit side-by-side on a shelf someday. Horror movies are also often proud products of their eras, and are quick to incorporate contemporary music on their soundtracks in ways that other genres often shy away from, in addition to frozen in amber glimpses of fashion, slang, and other signifiers, resulting in some of the less pretentious time capsules we have in the movies. If that all sounds very serious, don't worry, because these movies are all bonkers, and are all streaming. Have fun watching some trash.


FearDotCom One would be hard-pressed to think of a movie that takes itself as seriously in the face of sheer stupidity as FearDotCom, the braindead emptiness of which is heightened by an edgy Y2K aesthetic. Think of The Ring but even dumber, as anyone who visits a particularly spooooky website (FearDotCom.com, obviously) turns up dead within two days. Yes, there are ghostly web developers out there signing up for SquareSpace and making websites to ensnare the morbidly-minded, and not even Stephen Dorff can stop them. This regularly ends up on "worst movies ever made" lists for many reasons, why not discover them for yourself? (Available on Prime Video and Tubi)


Demons A good time for dirtbags, Demons features a zombie pandemic spread throughout Berlin by a cursed movie prop, ground zero of which happens to be a late night horror screening. Matters are only complicated by the coke-snorting punks who show up to raise hell at the theater, only to realize hell showed up early for the previews. Metalheads will appreciate tunes from Motley Crue, Accept, and Saxon cranking on the soundtrack, and the final motorcycle and sword battle set to Accept's proto-thrash classic "Fast as a Shark" is truly inspired. (Available on Mubi, Shudder, and Hoopla)


Werewolves on Wheels The title doesn't lie, your friendly neighborhood tarot-reading biker gang has decided to cast in its lot with the local Satanists, who offer them booze and drugs in exchange for their mortal souls. But since true bikers are beholden to no masters, only a few foolishly take the final bait, and when they begin to transform, the rest of the gang has to destroy the unnatural results. Since it's from 1971, the filmmakers are playing it totally straight and not making an Easy Rider parody with lycanthropy, so come prepared for sincerity (and more wheels than werewolves). (Available on Prime Video and Tubi)


Blood Diner If the comedy aspects of Blood Diner aren't immediately apparent from the "deranged uncle escapes from prison to say hello to his favorite nephews and then commits suicide by cop" cold open, the fact that the nephews spend the rest of the movie taking orders from their dear dead uncle's brain and eyeballs in a jar should make it clear. Then all of the sudden we're trying to resurrect a Sumerian goddess at a new wave show, attending a nude aerobics class (it goes badly), meeting a Nazi professional wrestler named Jimmy Hitler, and you've got a lot of tasteless chaos to untangle. It's the kind of movie you text your friends about while you watch it. (Available on Hulu)


The Devil's Rain Perhaps the best of the bunch here at balancing horror outrageousness (a Satanic cult deep in the desert led by Ernest Borgnine, who sometimes turns into a goat man) with an endearing sincerity (William Shatner plays the lead, without a hint of a wink to the audience), there's a lot to love about The Devil's Rain. The movie is also a delight just to look at, from the colorful stained glass of the dark church (equipped with its own sinister pipe organ) to the sweeping views of the desert, and the pacing is taut and the runtime is short. Look out for a young John Travolta, in his film debut, and Anton LaVey helping to provide "realism." (Available on Prime Video and Tubi)


Stir of Echoes Did you like Kevin Bacon in Mystic River and how Clint Eastwood's Oscar-winning film explored the rot that can overtake those who never leave the old neighborhood and how secrets can destroy those who keep them? Well, none of that thematic heft is present in the similarly-staged, also Bacon-starring Stir of Echoes (set in Chicago, so the accents shift accordingly), where spooky things start happening in a house because bad stuff happened there once, and the neighbors clearly know what's up but no one's talking. But Bacon's Tom has been hypnotized by his sister-in-law, which unlocks his ability to have selective premonitions and speak to the dead, so he has that going for him, which is nice. (Available on Hulu, Tubi, Hoopla, and Pluto TV)


Island of Death Without question the most questionable and problematic movie on the list, one of the legendary video nasties, Island of Death follows a pair of young psychopaths on vacation in Greece, where they find the weaknesses and secrets of the local townsfolk and exploit them in various horrific and deeply troubling ways. Every scene does its best to upstage the last in terms of taboo-busting and depravity, and more often than not, it succeeds. Imagine The Honeymoon Killers or Badlands but made by genuine misanthropes. Banned in many countries. (Available on Prime Video)


Waxwork The great David Warner gets to vamp about in Waxwork as the proprietor of a wax museum that draws its visitors (in this case, a bunch of preppy '80s teenagers) into the various scenarios staged within, which include werewolves, vampires, mummies, the Marquis de Sade, and zombies. It's mostly an excuse to hop from one horror trope to another, which works well enough, and the gaudy production design goes a long way to keeping this one visually stimulating enough to hold one's interest. (Available on Prime Video and Tubi)


Brainscan This one feels like a deeply disgusting fax sent directly from 1994, when our two biggest issues were 1) the rise of personal computers and 2) what to do with Edward Furlong's career. Our irredeemable hero is an incel who films his female neighbor in secret and revels in underground horror CD-ROMs, the kind you find advertised in the back pages of Fangoria. When the latest game arrives, it comes equipped with its own Beetlejuice/Freddy Krueger figure called Trickster, and Furlong's Michael is coerced into committing a variety of acts somewhat more heinous than the ones he was already committing in his day-to-day life. The soundtrack is a time capsule (Tad, Primus, White Zombie) and the movie's core is genuinely rotten: what's scarier than that? (Available on Crackle, which is terrifying in and of itself)