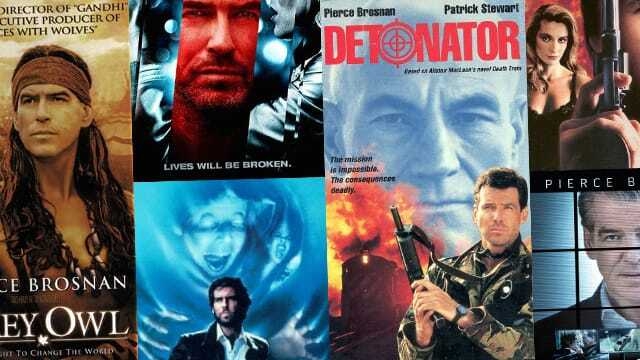 By Chris Steffen
There has never been a guaranteed track for how to pick the next James Bond, but Pierce Brosnan's path to 007hood somehow made it like a foregone conclusion. His rugged looks and suave demeanor put him at the top of the short list not once, but twice, after the unexpected renewal of his Remington Steele contract gave Timothy Dalton his time to shine. Your mileage may vary on Brosnan's ultimate handling of the role, but he was the Bond of Gen Xers and millennials, and has remained active since stepping away from the franchise.

So as we've all adapted to housebound lifestyles, some have delved more deeply into passions like baking, reading, activism, and fitness. I have been watching deep cuts from Pierce Brosnan's filmography. While by no means a comprehensive study, but rather an exploration of some of his goofier work, it's time to dig into some early, unrefined weirdness, some mid-career autopilot, and a few fun instances of playing against type.

There's a grand tradition of beloved actors getting their starts in horror movies, from Johnny Depp to Jennifer Aniston to Jamie Lee Curtis. Pierce Brosnan's first starring role was in John McTiernan's convoluted horror movie that interwove nonsense about a murder-worshipping cult, the transfer of a spirit from one body to another, Inuit mysticism, and a motorcycle gang that might be literal demons, including one played by Adam Ant. The final shot, clearly meant as a shocking conclusion, is now more likely to elicit a laugh. Also, in a recurring theme of not letting him speak in his real voice, Brosnan's character is inexplicably French. (Available on Prime Video and YouTube)

This 1988 movie starts to hint at his path to Bond. In Taffin Brosnan plays a debt collector who lives off the grid and doesn't appreciate English land developers paying so much attention to his small Irish town. He's working the sex appeal a little harder here, with George Michael stubble, some fascinating outfit choices, and a little red convertible. He also links up with a local bartender, played by Alison Doody (who, as a Nazi, seduced former 007 Sean Connery in Indiana Jones and The Last Crusade), and delivers scorchingly unhinged, screaming dialogue, which has become the film's main legacy. (Available on Tubi)

By the time Brosnan starred in this terrifically obnoxious made-for-TV whodunit in 1991, Dalton had starred in his final Bond, although no one knew it at the time. Litigation held up production on a third Dalton-starring film, and he walked away when his contract expired, opening the door for Brosnan's second opportunity to join the franchise.

In Murder 101, Brosnan plays a novelist and professor who, along with his students, is aggressively over-excited about designing the Perfect Murder. This unwittingly presages the onslaught of murder fetishization content that seems to have taken root as of late, with armchair gumshoes imagining -- and loudly sharing -- how they could out-think detectives and avoid leaving behind evidence. The final shot evokes the wall-breaking of the end of Jodorowsky's The Holy Mountain or, more recently, Almodovar's Pain and Glory, but significantly dumber. (Available on YouTube)

Another made-for-TV movie, this one first caught my eye back when I was digging through the Patrick Stewart filmography. While not Brosnan's first action movie -- or his first time dealing with ticking bombs -- it's perhaps his inaugural outing to Save the World. Something of a trial run for his first Bond two years later, he goes up against former Bond villain Christopher Lee (The Man With the Golden Gun), who is playing a disgruntled Russian out to reassert Soviet dominance. It spawned a sequel, which featured some of Brosnan's most exciting facial hair to date. (Available on YouTube)

Brosnan's portrayal of a Native American in Grey Owl is pretty problematic just from a glance at the poster, but the movie -- based on the true story of an influential conservationist who passed himself off as indigenous although he was British -- attempts to grapple with this sort of appropriation and issues regarding cultural identity, albeit in a very 1999 sort of way (ultimately landing on a note of "Ehh, who really got hurt?"). Released the same year as The World is Not Enough, this was part of a string of quasi-prestige pictures Brosnan was taking on at the time, including the 2002 child custody drama Evelyn (which I also watched but is tragically too boring to discuss at length) and the family drama The Nephew. (Available on Prime Video, Pluto TV, and Vudu)


Butterfly on a Wheel, aka Shattered

Now we fast-forward to the post-Bond era, when Brosnan turns against type and plays the antagonist in this truly bizarre thriller. He first appears in an all-time classic reveal (included in the above trailer), as he pops up from the back seat of Gerard Butler and Maria Bello's car, says he's kidnapped their daughter, and then spends the day ordering them to complete tasks in a very Die Hard With a Vengeance sort of way. Chicago natives will have a field day with the geographical hopscotch played by the movie, and a final series of twists makes for a trashy good time. (Available on Tubi, Vudu, and Pluto TV)

We close out with this 2016 technology thriller in which Brosnan plays a headline-grabbing entrepreneur (his big idea seems to be "A ridesharing app, but for planes") who is tormented by an aggrieved temp who becomes obsessed with Brosnan's daughter after coming over to fix their Wi-Fi. Brosnan mostly barks threats and wears a series of sharp suits, letting an absolutely manic performance by James Frecheville take center stage. We're treated to an intense new wave singalong in a speeding car, Frecheville forcing Brosnan to watch, on his car's dashboard screen, an intimate video of his own daughter, faking a positive breast cancer lab result, and a The Conversation-esque removal of all technology from a modern mansion for safety's sake. Though he seems free of the Bond character by this point, he still can't resist gritting his teeth in a wild thriller. (Available on Hulu)