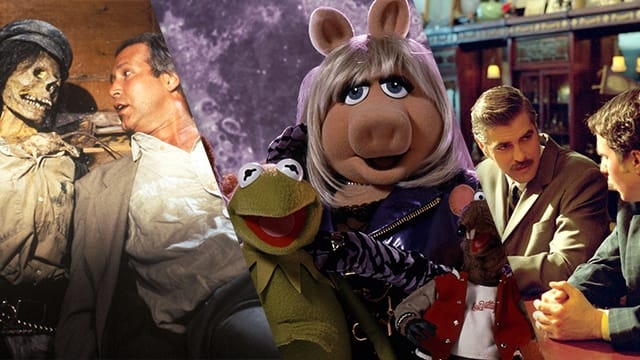 By AllMovie Staff
With so many millions of us stuck inside, it's time to put a dent in those watchlists or dig deeper for things we might not have otherwise explored. In that spirit of curiosity, we're going to share some suggestions for movies to stream, which should hopefully take you slightly off the beaten path. In this installment, we're breaking our recommendations into three categories based on how serious you're feeling about what you'd like to watch.

Bette Davis won her first Oscar for her mesmerizing performance as alcoholic, self-destructive stage actress Joyce Heath. A wealthy architect sets out to rehabilitate her career, and her growing attachment to him sends her flat marriage further into ruin. (Available on Pluto TV)

Confessions of a Dangerous Mind (2002)

George Clooney directed this "who's to say what the truth is?" tale, based on the outlandish memoirs of Chuck Barris. Barris (Sam Rockwell) was known in households across America as the man behind The Gong Show, The Newlywed Game, and The Dating Game, but he also claims that he was a hired killer working for the CIA. Clooney's film takes Barris at his word (which is much more fun), making for a madcap, paranoid take on the spy comedy. (Available on Vudu Free, Showtime, and Hulu)

In a grotesque category all its own is Dan Akyroyd's horror comedy, starring Chevy Chase and Demi Moore as two snooty New Yorkers who get pulled over on their way to Altantic City. When they're brought before the small town judge (Aykroyd wearing deeply unpleasant prosthetics), it's clear that this town and its inhabitants operate by their own rules, and the visitors are threatened with death in increasingly unsavory ways. Also, Tupac shows up. (Available on Vudu Free)

A seemingly-anachronistic dispatch from a long-lost era of hyper-masculine shoot-em-up action movies, this deathly serious heist flick casts Gerard Butler as Big Nick of the L.A. Sheriff's Department, on a collision course with an ex-military operative turned bank robber played by Pablo Schreiber (Orange is the New Black's Pornstache). Chests are pounded, threats are made at a hibachi restaurant, prom dates are intimidated by murderers for a laugh, and thousands of bullets are exchanged, all in the name of stealing some money from the federal reserve. (Available on Showtime)

At long last, the secret of just what the Great Gonzo happens to be is revealed! As Gonzo and his friend Rizzo hit the road in search of their roots, Gonzo makes a shocking discovery: his parents are actually space aliens from another galaxy. After announcing this startling news on Miss Piggy's talk show, Gonzo finds himself the subject of a dark and mysterious government conspiracy. (Available on IMDB TV and Vudu Free)

In this adaptation of Ira Levin's savagely satiric sci-fi novel, housewife Joanna (Katharine Ross) moves with husband Walter (Peter Masterson) and their children to the "ideal" suburban community of Stepford, CT. Slowly, Joanna deduces that something is amiss; most of the other housewives are vapid creatures who speak in trivialities and live only to please their husbands. Together with new friend Bobby, she investigates this curious status quo. (Available on Tubi)

For horror hounds, the fiends over at Shudder are opening up their library with a 30-day trial if you use the code SHUTIN.

The NFL has made its Gamepass service available for free until the end of May. This extensive library features complete games, recaps of every Super Bowl, past seasons of Hard Knocks, and documentaries about iconic players. The NFL Films brand is famous for its quality and wealth of footage, so this is a good chance to peek behind the curtain.