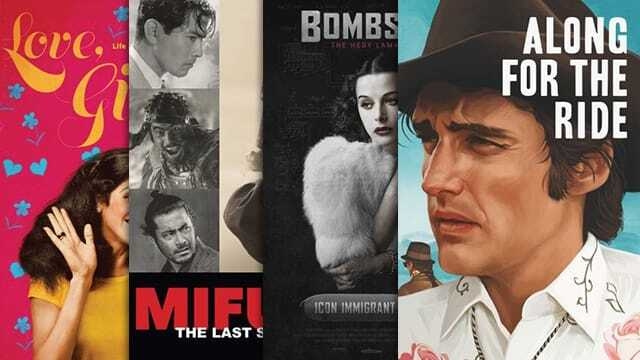 By Chris Steffen
Documentary portraits of the lives of movie stars and filmmakers are nothing new, but as the genre has persisted, the format has somewhat flattened out, yielding carbon copy stories with familiar beats. We've selected six films that break out from these molds, either due to the outsize personalities featured or stylistic choices that set them apart from the pack. And they're all streaming, right now.

Recently launched on Vudu, this acclaimed film explores the much too brief life of Anton Yelchin, appreciated by indie audiences for his thoughtful work in art house fare as well as Star Trek fans for his take on the character of Chekov. The documentary tracks his life as the Russian-born son of figure-skating parents, explores his hidden struggle with cystic fibrosis, and doesn't shy away from some of his less-admirable traits. (Available free on Vudu)

More than a collection of highlights from her film career, this documentary explores Hedy Lamarr's insatiable curiosity and inventive spirit. Pulling back the curtain on her sexpot screen persona, Bombshell focuses on how Lamarr developed technology to facilitate encrypted transmissions, which eventually evolved into things like WiFi and Bluetooth, and her battle to receive credit for her creations. Her later years are covered, as well, painting a sad portrait of what happens when a vibrant mind is considered past its usefulness because the body attached to it is no longer desirable. (Available on Netflix)

Toshiro Mifnue would have turned 100 on April 1, and the Criterion Channel has pulled out all the stops with an extensive collection of the Japanese icon's filmography. His life is difficult to summarize, but this documentary recruits some heavy hitters from both Japan and America to help explain what made Mifune so special, from his classic samurai films to his gritty, modern-day character work. (Available on the Criterion Channel)
Pharos of Chaos

Probably the most bizarre choice on this list, Pharos of Chaos finds the great Sterling Hayden (The Killing, Dr. Strangelove, Johnny Guitar) literally adrift. Based mostly on long, unedited, one-sided conversations, Hayden expounds on his personal philosophy and rates the high and low points of his film career, which he sees as merely a means to to support his naval lifestyle. The bearded, proudly alcoholic Hayden talks about his testimony during the Red Scare, admits to nearly drunkenly drowning one day before filming, and punctuates every. single. sentence. with a "Hmm?" affect. This could have been his audition tape for playing Colonel Kurtz. (Available on Mubi: view trailer)

Along for the Ride

While Hayden's turmoil may have been mostly kept off-screen, no one would be surprised to learn that Dennis Hopper was an absolute freak. The stories have been told again and again, some of them deeply unsettling, but here we learn about the man from one of the people closest to him, his longtime friend Satya de la Manitou. The many unsparing recollections of Hopper throughout his career include stories of Bruno Ganz punching him in the face mid-take, the disorder frequently found at his home in Taos, and his experience on Apocalypse Now. As it turns out, he was no friend of Colonel Kurtz. (Available on Hulu)

This warm documentary fills in the gaps between the well-known Gilda Radner bullet points, looking beyond her time on the original cast of Saturday Night Live and her public battle with ovarian cancer. The film uses Radner's diaries and home movies to flesh out the life of the woman we knew as Roseanne Roseannadanna, Baba Wawa, and Emily Litella, and brings in a bevy of comedic talent to share memories and try to wrap their heads around what made Radner so magnetic. (Available on Hulu)