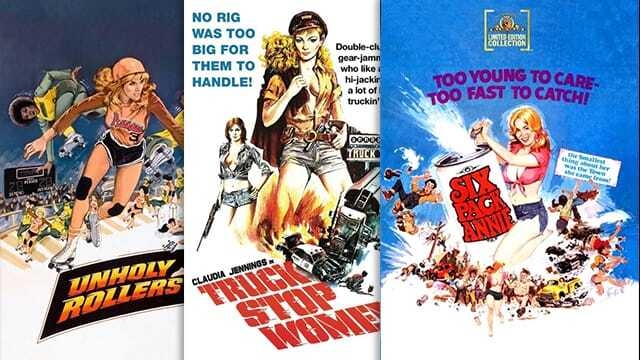 By Chris Steffen
As the curator of the daily staff picks on AllMovie, it's been hard to not flood the queue with some of the charmingly-deranged B-movies I've been gleefully devouring on Prime Video during the pandemic. So for all of our sakes, but especially for those on a wavelength similar to mine, here's a rundown of some of the endearingly-trashy (and admittedly extremely dated and problematic) lowlights of the Prime catalog.

Amir Shervan's 1989 movie sets the trashy bar extremely high with its helpfully-descriptive title and for its use of the late Robert Z'Dar, a man whose face is truly impossible to forget. The unrestrained, police-sanctioned violence makes this one a bit of a tougher pill to swallow than some of the others, but clearly no one in Samurai Cop is playing by the rules of our reality. (Also available on Tubi)

Two rival gas stations go to war -- one employing gangsters while the other enlists a bevy of babes -- in a battle for octane supremacy. The girls are more clever than their Playmate of the Month names would indicate, and end up flipping the biker gang that's been hired to intimidate them, although their methods remain dubious at best. Of course, Gas Pump Girls was distributed by Cannon, the kings of trash.

Perhaps my favorite discovery of this deep dive, Unholy Rollers stars the irrepressible Claudia Jennings as a fed-up factory worker who quits her lousy job and dives headfirst into the chaotic world of roller derby. She takes absolutely no shit from anyone and kicks ass all the way to the top of the league, leaving petty, jealous weaklings in a heap at her skate-clad feet.

Jennings also stars in Truck Stop Women, directed by Mark L. Lester of Commando and Firestarter fame. The truck stop in question also serves as a brothel for truckers, but when the mafia starts to make in-roads on the mother-daughter operation, heads will roll and trucks will collide. (Also available on Tubi)

Much like Charles Laughton before him, Patrick Wright directed only one film, 1976's Hollywood High. Light on plot and lighter on clothing, the opus follows four high school girls who need a private space for alone time with their boyfriends, and encounter a faded film star whose mansion might just be their solution.

One of the wilder additions to this list is Six Pack Annie, the nonstop abundance of which includes extensive casual drunk driving, a character who communicates solely via drunken screaming, and one of the better roadhouse brawls you'll see in a movie. Annie is a well-known local hellcat who seems to be the sole focus of the police department, but she doesn't have any time for their nonsense because she has to save her family's struggling restaurant by finding herself a sugar daddy in the city.

Also released under the spectacular name Aerobicide, Killer Workout is the only outright horror movie on the list. It's one of only a few movies where a tanning bed accident is the inciting incident, and certainly the only one in which a giant safety pin is the killer's signature weapon. Shlockmeister director David A. Prior's filmography is certainly worth further examination for the intrigued.

One of the only movies here to feature legitimate actors, Vigilante tells a well-worn story about a man let down by the system who takes matters into his own hands. The late Robert Forster (of the classic Medium Cool and, more recently, Breaking Bad fame) stars as the vengeance-seeking everyman, and Fred "The Hammer" Williamson appears as the leader of a crew that teaches Forster how to clean up the streets. Director William Lustig is best known for Maniac and the complete Maniac Cop franchise, which is set to be rebooted as a TV series by Nicolas Winding Refn. (Also on Vudu Free and Tubi)