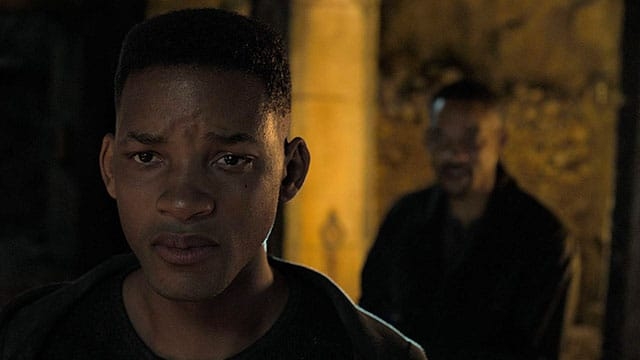 When the ultra-realistic aestheticism of director Ang Lee merges with the star power of Will Smith, cinematic captivation is inevitable. Their sci-fi thriller Gemini Man breathes fresh visuals into a tired genre while simultaneously sucking the life out of the story. It’s a paradox that simply means breathtaking to witness but not necessarily worth understanding or caring about.

The story focuses on Henry (Will Smith), a highly classified and skilled assassin on the verge of retirement. He’s weary and clearly guilt-stricken, especially when he says, “I’m finding myself avoiding mirrors lately.” It’s the kind of character that Smith has spent a career perfecting: brooding, funny, with a complicated past and hopeful future.

Henry is pulled back into the assassin life once again when he is presented with information that the people he’s worked and killed for have been lying to him. It’s the ultimate whammy of betrayal: stealing his DNA to create a younger, faster, and less guilt-driven clone as part of a top-secret program.

Even with the added clone twist, it borrows from any and every assassin-meets-conspiracy-meets-espionage flick you’ve ever seen. The ethical dilemma of Jason Bourne is paired with the wittiness of the Kingsman films to add an odd effect in this film. The major letdown is that the story is practically useless and utilized merely as filler for the action. Instead of an enigmatic tale of morality in an evolving scientific and military landscape, viewers are essentially treated to a Will Smith vanity project.

When Henry finally encounters his younger clone, “Junior,” he does everything he can to teach and mold his younger self so that he won’t make the same mistakes. But storytelling is at its most fascinating when it is insular and not so literalized. There is, however, one noticeable attempt at subtlety. Henry states that he’s afraid of drowning without any explanation as to why. Then there’s a random shot, almost forgotten in the shuffle, of Henry presumably as a kid, being held down in the pool by his father to teach him a lesson. We understand the visual language without having to be spoon-fed the answers. Unfortunately, there’s little more to expect from the thickheaded plotline.

Oddly enough, where the story lacks, the visuals give in abundance. Cinematographer Dion Beebe and the visual effects team put in the legwork, so much so that Gemini Man is hands down the most illustrious and ambitious film spectacle this year. Its use of a high-frame rate (120 frames per second) makes the action vivid and intense, almost as though you are really in that story, not just watching it play out. One of Gemini Man‘s many perfectly constructed scenes that benefits from this high-frame rate is the motorcycle chase through Cartagena. As Henry and his clone do the cat-and-mouse dance of who can kill whom first, the editing is maniacally intent on getting you to sit on the edge of your seat. The brightly colored villas, dynamic shots whizzing through heart-stopping traffic, and the music raising your heartbeat to the sound of drums all combine to enthrall the audience. Beat by beat, shot after shot, it’s a feast for the senses.

Clive Owen is disappointing, however. He’s no stranger to the villainy he plays in Gemini Man, as Henry’s former boss who created the clone program. Yet it’s rather surprising how hackney Owen’s performance registers in the film. The impression is less of a madman desperately seeking alternate ways to save human lives and more a vaudeville, Austin Powers-type villain that is over the top and makes the grand speeches about his evil plans. Even more stale is Will Smith’s portrayal of his younger clone. Maybe it’s the CGI, or possibly Smith thinks a clone with no conscience looks perpetually pouty and meek.

Gemini Man is a film that could have used a major discussion between the left brain and right brain. It would have benefitted from being able to converge its sleek and cool cinematic visual with a story that could meet it at eye-level.