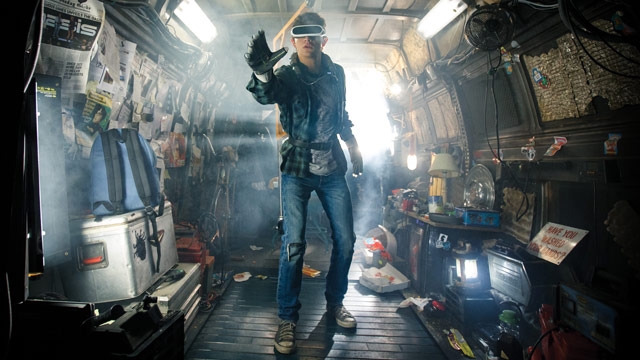 Little kids might be hunting for real Easter eggs in the park this weekend, but those who are old enough to have a penchant for 80’s pop culture won’t have any trouble finding figurative Easter eggs in Ready Player One. Director Steven Spielberg adapts Ernest Cline’s 2011 novel for the big screen, propelling audiences through this whirlwind action sci-fi blockbuster. But could Spielberg have cut away too much of the novel?

Spielberg creates a richly detailed world that’s both familiar and fantastic at once. The story starts with an expedient explanation of the movie’s fictional world from the orphaned teenage hero Wade Watts (Tye Sheridan). The year is 2045 and he lives in a dystopian Columbus, Ohio with his aunt and her abusive boyfriend. The place they live in is called the Stacks, and it’s a favela-like cross between a junk yard and a trailer park gone haphazardly vertical. Everyone, from the poverty-stricken populace to the mega corporation IOI, is spending every last penny they have to increase their chances to win a prize inside an immersive online virtual universe.

The prize that they’re fighting over is the enormous fortune of the deceased James Halliday (Mark Rylance), the creator of the MMORPG called OASIS. Halliday, a shy, awkward man who’s obsessed with 80’s pop culture, designed a competition called Halliday’s Easter Egg Hunt in order to find a worthy heir. Players need to find three keys hidden inside OASIS by solving clues and riddles. With the stakes set, Wade embarks on the adventure with his in-game buddies.

As with most of Spielberg’s sci-fi work like A.I. and Minority Report, the display of technological wizardry in the fictional near-future fascinates the eye. The game world of OASIS is vibrant, buzzing with energy. There’s a race in the beginning of the movie that whips viewers around at breakneck speeds. Viewers who opt for the 3D screening are definitely rewarded—action sequences throughout the movie are already arresting in their dynamicity, and they become even more gripping in the 3D version. And don’t forget the 80’s pop music anthem, which injects the movie with the era’s signature electric cheerfulness.

Yet, viewers may come away feeling that all the razzle and dazzle are just spectacles that outshine the characters. Unlike films like A.I., the drama that drives the action in this movie is weak. For instance, Wade’s bad relationship with his aunt weakens the emotional stakes, and little is done to develop his character. It also doesn’t help that Tye Sheridan’s acting is overshadowed by Olivia Cooke’s performance as Samantha Cook. Perhaps Cooke had a better backstory to work with, but she steals the show with her motif of a combination of wounded vulnerability and intensity.

It’s all a shame, really. The movie runs for a whole two hours and twenty minutes, so there’s no reason that a director as masterful and deft as Spielberg couldn’t do more with the story and the characters. Without spending as much time developing the character as the novel did, the movie’s ending that doesn’t feel quite as epic as it should. For that reason, Ready Player One is best enjoyed as one heck of an action-packed adventure. Folks who really dig 80’s pop culture will love the movie for all its shout-outs, but other audiences will probably find the movie enjoyable if otherwise forgettable and facile.