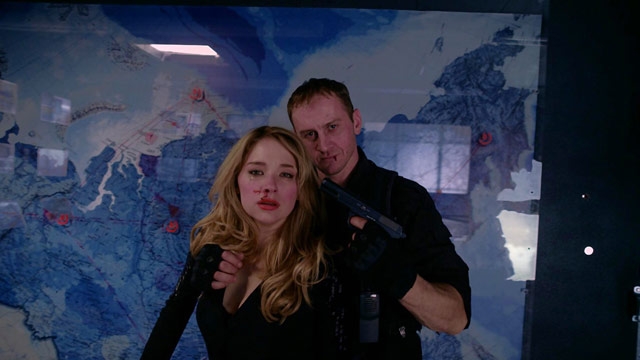 Writer/director Ilya Naishuller created Hardcore Henry after helming an extremely violent music video for the Russian indie-rock band Biting Elbows, which was also shot from a first-person p.o.v. That video was clever from a technical standpoint, but it was less than five minutes long. Extended to feature-length, this technique becomes boring, repetitive, and stomach churning. It’s like being strapped in the front seat of a high-speed rollercoaster for an hour and a half; the first couple of loops are thrilling, but eventually you just want to jump off. And maybe throw up.

So, what’s it about? I doubt even Naishuller could explain the film’s nonsensical storyline, but here goes. Henry is a nonspeaking cyborg who is being chased by an endless barrage of Russian thugs throughout Moscow, many of whom are also cyborgs. The chief villain is Akan (Danila Kozlovsky), a pale Andy Warhol clone who possesses Force-like powers and is apparently bent on world domination. Akan used his cyborgs to kidnap Henry’s wife Estelle (Haley Bennett), and Henry wants her back. Adding to the confusion is the frequent presence of Jimmy (Sharlto Copley, embarrassingly awful), a shape-shifting secret agent aiding Henry who keeps getting killed, only to return to life under different guises (a homeless person, a spike-haired punk rocker, a World War II British commander, etc.). In one bizarre sequence, Jimmy breaks into song and croons Frank Sinatra’s “I’ve Got You Under My Skin.” Why? Good question.

Hardcore Henry, much like your average first-person-shooter video game, intends to put guns, knives, grenades, and other weaponry into the hands of the audience and turn them into robot-like killers -- and it feels like it succeeds in doing so. But the end result is like being subjected to the behavioral-altering Ludovico technique in A Clockwork Orange, in which sociopathic Alex is strapped to a chair, injected with drugs, has his eyelids propped open, and is then forced to watch violent images until he becomes sickened by them.