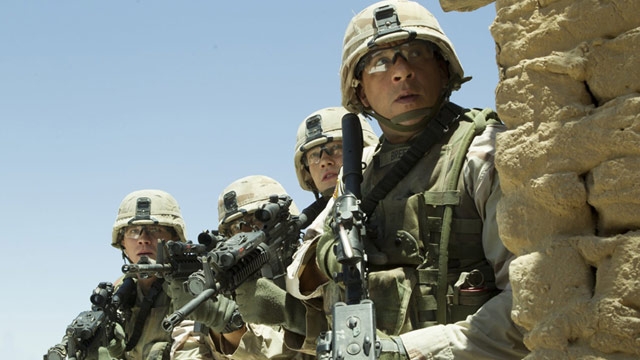 War is a complex subject to address no matter what the medium, and Ang Lee’s latest endeavor, Billy Lynn’s Long Halftime Walk, ambitiously attempts to explore both wartime conflict and its aftermath through the eyes of one young veteran.

Based on Ben Fountain’s 2012 novel of the same name, Billy Lynn follows its eponymous protagonist, a 19-year-old soldier, as he briefly returns home from the Iraq War in 2004. Billy Lynn and his unit are chosen to be honored on live television during a massive NFL game in Texas, as a result of a now-iconic photograph that captured them during a particularly harrowing firefight in which Billy lost one of his brothers in arms. The unit are given the royal treatment, including a stretch hummer limousine, promises from a Hollywood producer named Albert (Chris Tucker) that a movie will be made about them, and the opportunity to participate in a halftime show with Destiny’s Child. The story is basically Billy’s stream of consciousness throughout the football game: The audience experience flashbacks from the war and Billy’s conversations with his family, both of which ultimately propel him on a journey of self-discovery.

Not only did Ang Lee shoot the film at a heightened camera speed of 120 frames per second (the average movie is shot at 24 FPS), he also implements several changes in perspective. The decision to shift occasionally to a first-person P.O.V. was surely meant, along with the higher frame rate, to add authenticity to the story. However, it feels at times like viewers are being force-fed an emotional response through the use of these techniques.

The film is also hugely ambitious, attempting to cram in a large number of story lines and sociopolitical resonance. Between the copious “real-time” events at the football game, the wartime flashbacks, and the memories of conversations between Billy and his sister (Kristen Stewart), the audience are left with a well-assembled, but woefully skeletal narrative. The subplot involving Albert and Norm (Steve Martin), the two Hollywood suits who want to make a movie about Billy’s unit, feels confusing as is and probably needed to be fleshed out more.

The main strength of the movie are the actors: Joe Alwyn offers an emotionally compelling performance as the titular Billy Lynn, and Garrett Hedlund shines as his commanding officer Dime. Vin Diesel and Kristen Stewart provide just the right amount of nuance and support in their roles, and Martin does what he can with the hyperbolic character of Norm.

Though the film doesn’t quite hit its mark, it subtly and tactfully investigates post-traumatic stress disorder and manages to neither glorify war nor vilify the military. The only reason Lynn’s unit are being publicly showered with affection and attention is because powerful people in Hollywood are hoping to profit from their story under the guise of reclaiming it for the American people, which represents a fascinating, yet painfully honest portrait of the United States’ reception to and treatment of its veterans -- something that is rarely addressed in most mainstream films.