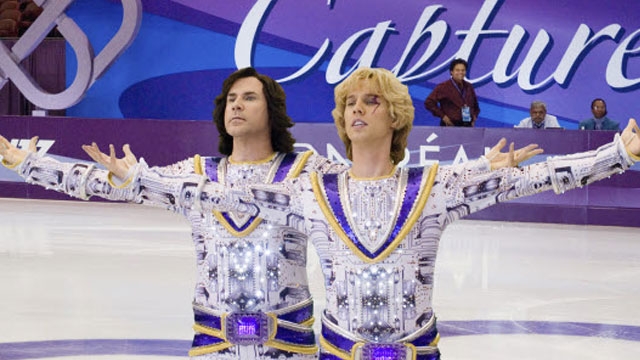 The sports of the Winter Olympics have a certain kind of internal theatricality that their counterparts in the summer lack. Competitors throw themselves down mountains and wear blades that are literally razor sharp. Swimming just doesn't seem that interesting, comparatively. Is it any wonder, then, that some of the greatest films about the Olympics take place in the snow and ice? Here's a look at the best of the best:

Nancy Kerrigan's situation was nothing compared to what Lynne-Holly Johnson's Lexie Winston goes through in this '70s classic. Figure skating is a tough sport—I know from experience—but at least most competitors can see the ice coming at them when they crash to the ground. But Lexie, well, she's so dedicated that she leaves a party to go practice, falls, hits her head, and goes blind. But the combination of her boyfriend's love and her indominatable Olympic spirit guide her better than eyes ever could. It's ridiculous and saccharine, sure, but no more so than most of the bio segments we see during the actual games.

Buy Blades of Glory on DVD

Most movies about figure skating refuse to acknowledge the... how shall I say this... self-importance and histrionics endemic to the sport. So much of what the competitors are judged on happens before they even step onto the ice that results are incomprehensible to the average viewer. So it's delightful that Blades of Glory puts that all front and center. The psychodrama, the ridiculous costumes, the conflict between athleticism and artistry—who better than Will Ferrell to take down its facade of seriousness?

U-S-A! U-S-A! Combine Kurt Russell with one of the Cold War's most indelible Olympic memories, and you have Miracle. It's the Miracle on Ice story, Disneyfied, but it gets the tone of hockey just right (assuming you ignore the complete lack of curse words, which is as much a part of the sport as lost teeth). To paraphrase one of the greatest pieces of dialogue from the movie, a lot of guys from Minnesota and Boston up against the unstoppable Soviet Red Machine? Yeah, that's gonna work. But it does, and as Coach Herb Brooks, Kurt Russell is better than he has been in years.

Buy The Cutting Edge on DVD

Coming out at the height of figure skating-mania, The Cutting Edge holds a special place in the hearts of many female millennials—myself included. Doug Dorsey, injured-yet-badass hockey player tries clawing his way back to the Olympics by becoming the partner of an uptight, rich figure skater who's alienated the world. It's a story of love, class, and the toepick set to an awesomely ridiculous '90s soundtrack, and is so beloved it's spawned multiple direct-to-cable sequels (of which the less said, the better).

To my mind, there's no movie that better captures the Olympic spirit than Cool Runnings. This fictionalized story of the 1988 Jamaican Bobsled Team makes an underdog of a group of (mostly) elite sprinters by putting them on ice after their dreams of running the summer games are ruined. They don't win (of course they don't), but they prove to be the most honorable atheletes in Calgary when they triumph over adversity. And even if that's all too cheesy for you, there are so many great lines in the film that you'll be cheering along with everyone else despite all of your pretensions of being jaded.

Leah E. Friedman is the managing editor of AllMovie. Her first figure skating program was set to the theme music from Star Trek: The Next Generation. She lost.