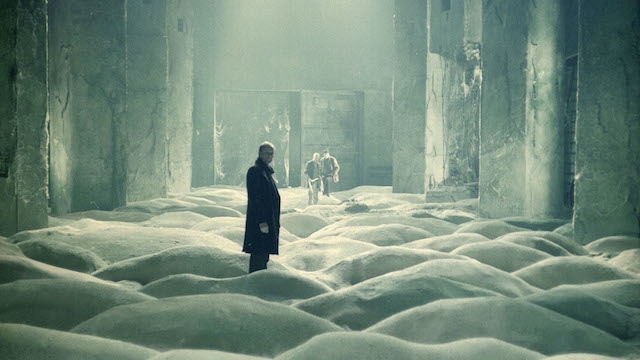 The mention of Sergei Eisenstein during the Sochi Olympics Opening Ceremonies got us thinking about the debt the art of filmmaking owes to the Russians. Luckily, we had a Russophile on staff who was more than happy to take us through the high points. Here's our take on the essentials of Russian cinema.

Sergei Eisenstein, should be a jumping off point for any cinephile—not just fans of Russian film. One of the first true auteurs, Eisenstein moved the form beyond a kind of glorified theater and into a medium of its own, most notably in this 65-minute depiction of the mutiny aboard the Potemkin (which itself was part of an early, failed attempt to overthrow the Czar). The "Odessa Steps" segment of the film is one of the most famous in all of film, and its legacy can be found in every montage that's graced the silver screen since. Sure, it's blatant propaganda, but even after 89 years, it's the technique and theory for which Eisenstein was reknowned that's most striking.

Buy The Diamond Arm on DVD

This might come as a shock, but it's true: the Soviets had an excellent sense of humor about themselves. Russia has long had a rich comedic tradition (read some Gogol if you don't believe me), though it might have been unrecognizable to many in the West, given that it was shot through with exasperation and pathos. This particular farce, released during the most frigid part of the Cold War, pulls much of its humor from the difficulties of living in the Soviet Union—especially where travel is concerned. While its characters imagine life in the West as constant sightings of Sophia Loren and liquid diets of Coca-Cola, the film itself is stylistically incredibly western, while still making the Soviet authorities the good guys.

The first of two films on this list by the truly visionary Russian film director Andrei Tarkovsky, Solaris is arguably his most famous—and influential. Occasionally viewed as a Soviet counter to Stanley Kubrick's 2001: A Space Odyssey, Solaris is a work all its own, with more to say about the human condition than Kubrick's. Solaris is a planet, but also an incomprehensible organism, while the human space station in orbit is a metaphor for the fleeting nature of human existence. It's heavy stuff (as the denizens of '70s arthouses might have said upon seeing it), but incredibly beautiful and a masterpiece of technical filmmaking.

This 1979 Tarkovsky work is not a companion piece of Solaris, but it does share many of the same themes. On the whole, however, its story (three men follow a guide through a forbidden area in the wilderness called "the Zone" in which the laws of physics don't always apply in order to find a magical room in which a person's every wish comes true) is less alien and more mystical, and the film itself is filled with religious metaphor and iconography, notably the concept of a Holy Fool, which is an incredibly strong motif in the Russian literary identity. It's metaphysical, but in a particularly Russian way, and its prominence in the culture has only increased since the Chernobyl accident, which left a landscape much like the one shown in Tarkovsky's film.

Watch Burnt by the Sun on Amazon Instant Video

This French-Russian coproduction was the first important film to come out of the East after the fall of the Soviet Union. It won the 1994 Academy Award for Best Foreign Language Film and its production values are stunning—quite frankly, far better than anything produced under the state-owned Soviet film system. More interesting than that, however, is that it's the first Russian film to honestly deal with the legacy of Stalin's purges, mostly by focusing on one idyllic, sun-dappled day in the life of a revolutionary hero. It's not exactly The Gulag Archipelago, but it doesn't treat the horrors of the purges with kid gloves either— if anything, it's more shocking when we, as viewers, are violently pulled out of a false sense of security.

The late '90s were not exactly easy times in Russia. The corporate oligarchs had begun their unstoppable ascension, mostly due to corruption and intimidation, and though the ruble hadn't yet crashed in 1997 when Brother was released, the pessimism of the era is palpable in this moody crime drama. Yes, it's a mob film, but it's about as far from the American mob film tradition as possible. There are no good-natured cooking-with-garlic-in-prison scenes here. Brother is unrelentingly violent and nihilistic, and the type of film that makes the weather in Russia seem like the most hospitable part of the country.

2002's Russian Ark is, quite simply, an incredible film. Filmed in one continuous take, it's a tour through several things: the Winter Palace, time, and Russian art and literature. Moving fluidly between eras, we're treated to vignettes that feel so honest and organic that it feels like eavesdropping on history. We travel from the flourishing of the arts under the rule of Catherine the Great to the 900-day siege of Leningrad during World War II (where we witness a desperate citizen searching for wood with which to build his own coffin), and back to the a scene of the Romanov daughters running carefree through the palace. It's incredible to contemplate, really, given the technical challenges of filming a 96-minute movie in one take, but also in how it's the such a solid introduction to hundreds of years worth of Russian art and culture.


What's up next in the world of Russian film? Check out the trailer for Stalingrad, opening in IMAX® 3D theaters nationwide on February 28, 2014:


Leah E. Friedman is the managing editor of AllMovie. She has a degree in Russian literature. In 2001, she wrote a thousand words about Edward Norton for the National Russian Essay Contest.