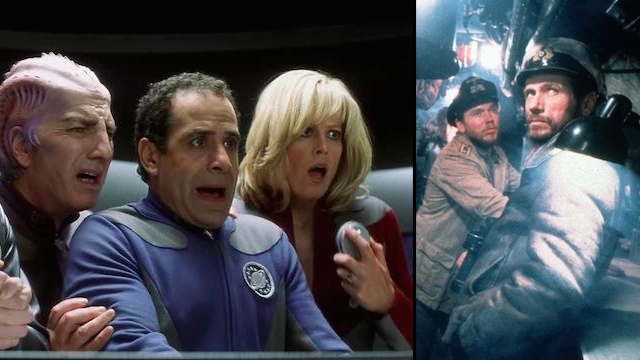 No, it's not about a shoe. It's about a boat—a German U-boat, to be specific. It's long (149 minutes), and it has subtitles, but it's a seminal war film (perhaps the seminal war film) because of its intense devotion to realism. Its focus is on the lives and daily labors of the crew of the U-96 and the long periods boredom aboard a submarine. Despite the screenplay's focus on that monotony, Das Boot is ultimately a fascinating character study paired with exquisite cinematography

Galaxy Quest might be the greatest Star Trek movie of all time. Skewering everything from the special effects to actors' egos, the fans, and even the concept of a "communications officer," it's both a wickedly funny parody, and a fully-developed world of its own. Sure, the plot structure seems to have been directly lifted from Three Amigos!, but hey, there are worse to steal from. The cast is top-notch and exceptionally committed; in fact, it might just be the best work of Tim Allen's career (not a high bar, admittedly, but he really is terrific as a deluded Shatner clone), while Alan Rickman is clearly having a ball as the long-suffering, Shakespearian-trained Alexander Dane. Besides, after Das Boot, you'll need a laugh or twelve.


Leah E. Friedman is the managing editor of AllMovie. She made her father take her to see Space Jam on opening day.