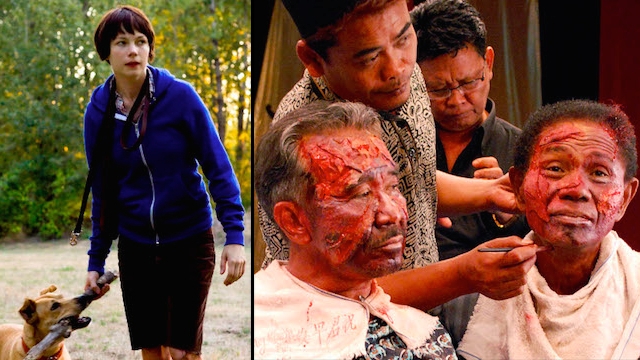 It's Bleak Movie Week here at AllMovie, apparently! What are the best films available to watch online this week? Check out our recommendations:

Watch Wendy and Lucy for free on SnagFilms

Director Kelly Reichardt brings her spare visuals to this claustrophobic (in a good way) story about Wendy, a down-on-her-luck Indiana women en route to Alaska with nothing but her car and her dog. In short order, the car dies, and the dog, Lucy, is lost. In a particularly weird way, it's a terrifying film. No, there are no killers or hostages or anything of the sort, but what it does show (an increasingly desperate woman on the verge of losing hope) is difficult to watch only because of the there-but-for-the-grace-of-god-go-I plot. A de-glammed Michelle Williams gives one of the more affecting performances of her career, so it only makes sense that she collaborated with Reichardt again two years later in 2008's Meek's Cutoff—also a superb (and superbly depressing) film.

The Act of Killing

Watch The Act of Killing on Amazon Instant Video

Executive produced by documentary legends Werner Herzog and Errol Morris, and directed by relative newcomer Joshua Oppenheimer, The Act of Killing tries to find the rationale behind Indonesia's mass slaughter of Communists in the 1960s. Death squad leader Anwar Congo is given the opportunity to reenact his killings in the style of various Hollywood films (big grins and all). Paradoxically, in becoming an "actor," he disassociates himself from his history and begins to understand the heinous nature of his crimes. It's a film that's both impossible to watch, and impossible not to watch.


Leah E. Friedman is the managing editor of AllMovie. She's been a nihilist since childhood.