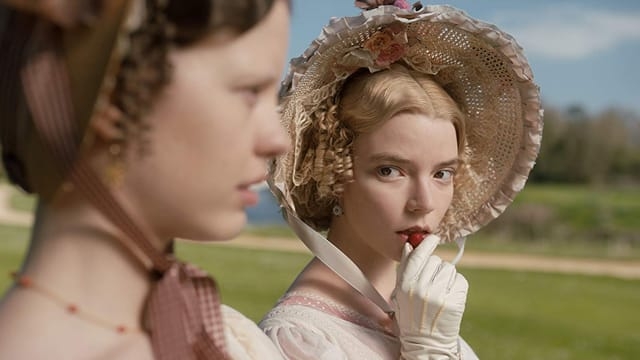 The latest rendition of Jane Austen’s classic English novel, Emma. blends polite snark with gorgeous visuals for a cinematic delight. A romantic comedy period piece with no agenda and brimming with wit, there is plenty at work in this timeless exploration of what draws people together.

Born into country wealth, Emma (Anya Taylor-Joy) lives alone on an estate with her scene-stealing hypochondriac father, Mr. Woodhouse (Bill Nighy). She has the rare luxury for women of her day and age of not needing to get married just to survive. This leaves her plenty of time to meddle with other people’s affairs. Despite Emma’s more irksome qualities, she does have a good heart, and looks out for Harriet (Mia Goth), an orphan girl of low status. When Emma discovers Harriet’s crush on local farmer Mr. Martin (Connor Swindells) she takes it on herself to play unqualified matchmaker and sabotages their obvious connection. But as fate would have it, the undesirable vicar Mr. Elton (Josh O’Connor), who Emma tries to hook Harriet up with, ends up with a taste for Emma instead.

Meanwhile, Emma finds the apple of her eye when she sets her sights on handsome, wealthy, and mysterious Frank Churchhill (Callum Turner). However, as luck would have it, there’s a new girl who comes to town, Jane Fairfax (Amber Anderson), and she vies for the attention of all the men in town, much to Emma’s chagrin. While all this drama unfolds, only one man, Mr. Knightly (Johnny Flynn), sees Emma for who she truly is, and he calls her on it. Despite their obvious and palpable attraction to one another, they can chalk up their witty banter to being childhood friends and play off their growing feelings for one another – until they can’t. Emma’s greatest struggle is to step away from the reins and recognize what’s right in front of her.

Director Autumn de Wilde makes an impressive feature debut, transitioning from shorts and music videos to a full-length period film. She handles the cast with attention to the minute details that really sell the entire piece: the understated, polite reactions to the inherent drama of a society whose people seldom speak their minds. Newcomer Eleanor Catton writes a faithful adaptation of Jane Austen’s Emma, which proves to be marginally different from previous Emma adaptations. Whether it’s her own attention to detail, or more likely the strength of the source material, it all works well here.

Ultimately, despite its picturesque beauty, fine performances, and continuously amusing character quirks, Emma. may prove to be both a gripping romance while still moving too slowly to be universally enjoyed. Still, while Emma herself seems fairly unlikeable at the beginning, the film turns into a perfect date movie that is well served on the big screen.