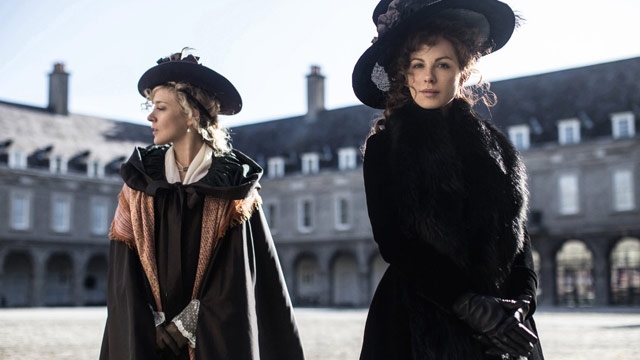 Kate Beckinsale stars as Lady Susan Vernon, “the most accomplished flirt in all England,” in director Whit Stillman’s pleasing, if slight, comedy of manners set among the estate-dwelling privileged class in late 18th century Britain. Elegantly adapted by Stillman from Jane Austen’s posthumously published novella “Lady Susan,” the story begins with the recently widowed -- but grief-free -- Susan slithering her way into the posh residence of her late husband’s wealthy brother Charles (Justin Edwards) and his keen-eyed wife Catherine (Emma Greenwell). Nearly penniless, Lady Susan plots to seduce Catherine’s impressionable younger brother Reginald (Xavier Samuel) and get him to marry her, and foist her neglected 16-year-old daughter Frederica (Morfydd Clark) off on Sir James Martin (scene stealer Tom Bennett), a true idiot, but one who possesses vast riches. And all while continuing to see her married lover Lord Manwaring (Lochlann O’Mearain).

Lady Susan’s scheming doesn’t go unnoticed, however, especially by the wise women around her who try their best to squelch her duplicitous intentions. “She has an uncanny understanding of men’s natures,” one laments. But, alas, they are no match for the razor-tongued master manipulator. Aiding Lady Susan is her American friend Alicia (Chloë Sevigny), who is married to a dull but rich stiff (Stephen Fry) “too old to be governable, too young to die,” as Susan so bluntly describes him. Together, the two set about to secure Susan a comfortable future, regardless of the number of lives they ruin, and with nary a thought about love.

Beckinsale is radiant as the viperous Susan and commandeers every scene she’s in. Even when she’s spitting venom, Susan usually does so with a captivating smile or with such a confident air of superiority that it leaves everyone around her breathless. But as winning as Beckinsale is in the role, Stillman never allows us to see beneath Susan’s steely facade, which robs the character of emotional depth and some much-needed sympathy. As is, Lady Susan is a fascinating monster to watch, as she delicately devours everyone in her path, but she’s too shallow to really invest ourselves in her outcome.

Love & Friendship is exquisitely photographed, handsomely costumed, and many individual scenes are sharply written (much of the dialogue is highly quotable), and are performed with acute precision. Unfortunately, the story is so lightweight and forgettable (perhaps it’s why Austen never attempted to have the epistolary tale published) that it will likely dissipate from viewers’ memories even before they reach the lobby.

Even so, Beckinsale is divine and any new Austen adaptation or Stillman film is a welcome treat, so go and enjoy the minor pleasures Love & Friendship has to offer. Just don’t expect to recall them once you exit the theater.