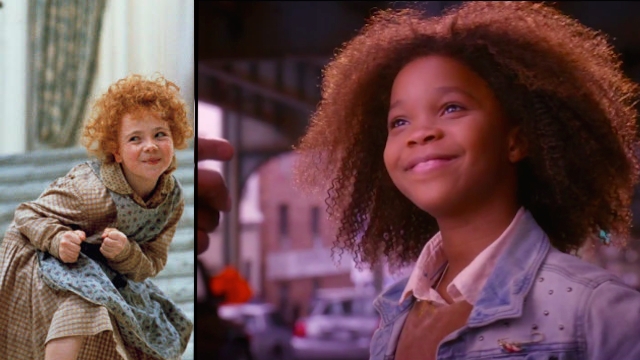 If you're a girl who came of age any time in the last three-and-a-half decades and had any interest in theater (however fleeting it may have been), you almost certainly watched or were in a production of (or watched the movie adaptation of, or sang a selection from, or appreciated the Jay-Z sample of "Hard Knock Life" from) the musical Annie. That Depression-set, too-cute-by-half tribute to plucky optimism and the American Dream that is as ubiquitous as its most well-known song, "Tomorrow".

When Sony announced it was readapting Annie for the screen, I cringed. The 1982 film version is... not great. It sucks all the life out of a show that should be bursting at the seams with it. Carol Burnett is inspired as Miss Hannigan, but pretty much everyone else looks like they'd rather be anywhere else, especially Albert Finney—and he's playing a billionaire during the Depression. Life wasn't terrible for Oliver "Daddy" Warbucks. Aileen Quinn as the titular ginger is forgettable, while Broadway dance legend Ann Reinking is practically straightjacketed.

Watching it, one's impression is liable to be, I would rather have lived during the Depression than watch this death mask rictus version of happiness.

So Sony's version, starring Beasts of the Southern Wild's Oscar-nominated Quvenzhané Wallis as Annie and Jamie Foxx as Oliver Warbucks stand-in Will Stacks looks to be an honest-to-god breath of fresh air—which is ironic, because based on the trailer, the movie looks to be dripping with millennial cynicism. Wallis's Annie is savvy (and not just in the art of escaping in a laundry cart) and Stacks is machiavellian (at least at first); a far cry from the unlosable innocence of the original play.

Director and screenwriter Will Gluck (Easy A) looks to have done a smart thing in updating this musical. I have to admit that I'm charmed by what little I've seen and despite the inclusion of the eternally teeth-achingly saccharine "Tomorrow" in the trailer (it's still Annie; you can't leave out the show's most iconic song), I didn't roll my eyes once. In fact, I found myself smiling, which I suppose is what the show is actually supposed to make you do.

Annie is scheduled for release December 19, 2014. Check out the trailer:

Leah E. Friedman is the managing editor of AllMovie. In her youth, she performed in Annie at Jewish summer camp. Of course she did.