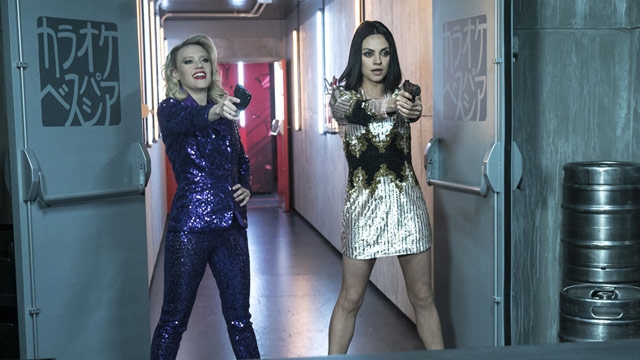 The Spy Who Dumped Me manages a rare feat: it overpowers its fairly bland title and creates a parody that boasts action on par with the films it is poking fun of. In the opening five minutes we are introduced to the humdrum life of two besties who are bemoaning a breakup, only for the boyfriend who did the dumping to suddenly turn up and reveal that he’s a spy. Soon after, details about a mission to stop a terrorist organization in Vienna surface, and he is shot killed. This launches us into a nonstop comedy thrill ride for the next two hours, something that would be dark if we weren’t so desensitized to the violence expected in films like this.

Audrey (Mila Kunis), the one who gets dumped, switches from heartbreak to full panic mode as she realizes the severity of the situation. Doubly betrayed by her spy ex-boyfriend, she mourns the loss, and realizes that he has jeopardized she and her friend’s lives as well. Morgan (Kate McKinnon), Audrey’s aforementioned bestie, is caught in the middle, but since she’s the type of friend whose sense of adventure outweighs logic, she recommends that they go to Europe to help the finish the job.

While this premise has been done so many times before, The Spy Who Dumped Me outclasses many of its predecessors. The often dark humor ranges from crazy to over-the-top, but lands more hits than misses. The realism of the ridiculous scenario is well executed: Audrey is a crack shot as a spy because she loves playing video games, while Morgan is a zany performer and zany friend who needs to do zany things to fit into the spy world.

Writer/Director Susanna Fogel (Life Partners) cooks up her comedy briskly, with plenty of one-liners, ridiculous scenarios, cringe-worthy moments, and some genuinely funny scenes that capitalize on McKinnon’s brand of hyper charm. But it’s Fogel’s keen eye for the action scenes that almost trump the laughs in this film.

Where the movie starts to split at the seams is in its lack of a decent villain. Relative newcomer Ivanna Sakhno (Pacific Rim Uprising) is a bit bland, and despite almost too much effort on her part, she has very little material to work with. While this act might work better in a Zucker, Zucker, and Abrahams spy comedy of the 80’s, it seems a little out of place here. For the relatively clever film that it is, The Spy Who Dumped Me could have dug a little deeper and allowed for a more motivated or intelligent villain.

Watching action movies like this on the big screen can be a real treat, but it would work just as well as a fun date night/girls night rental. And while Kunis and McKinnon are both delightful to watch on screen, and bring plenty of laughs to the table, The Spy Who Dumped Me has a few flaws underneath the makeup.