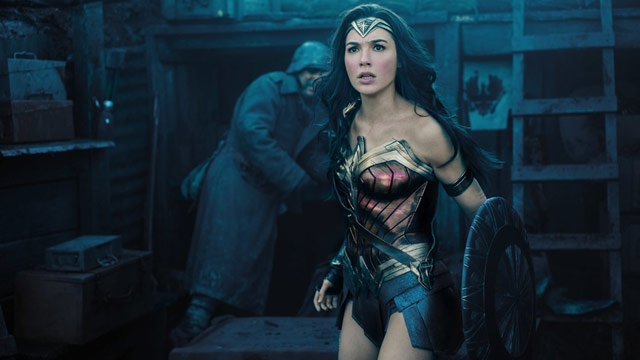 Wonder Woman has been the subject of a level of anticipation rarely experienced by big-budget action flicks these days. The previous films in the DC Comics Extended Universe series (Man of Steel, Batman v Superman, and Suicide Squad) have left both critics and comic-book fans increasingly disappointed in the franchise’s output; as a result, Wonder Woman, which is receiving its release ahead of the first Justice League movie (set to premiere this November), has been saddled with the burden of recovering DC’s tainted reputation in the eyes of viewers, while also representing the first major female-fronted superhero flick in more than a decade. Wonder Woman herself (Gal Gadot) was previously seen in last year’s Batman v Superman: Dawn of Justice, and the enthusiastic reception of her supporting role in that picture has raised expectations for her solo feature even higher. Luckily, the movie lives up to the hype quite well, delivering a unique spin on the superhero genre that serves as a welcome breath of fresh air.

The majority of the film takes place as an extended flashback, beginning with Wonder Woman’s mythical origins on Themyscira, an island populated by immortal women known as Amazons. The details of Wonder Woman’s origin have been described differently in the various comic-book and television versions of her story, but her identity as Diana of Themyscira, the daughter of the island’s queen, Hippolyta (Connie Nielsen), is carried over intact from previous incarnations.

The crash landing of American spy Steve Trevor (Chris Pine) off the shore of Themyscira brings an invasion of German soldiers to the previously isolated island, prompting Diana’s decision to join Trevor in an attempt to end World War I. Their journey to 1910s Europe is her first glimpse of civilization outside of the insular environment of Themyscira, and the film derives ample doses of humor from her amazement at the strange world she has stumbled upon. Trevor is also Diana’s first male acquaintance, and the relationship between the two proves to be fertile ground for jokes as well, causing the film to veer towards romantic comedy at times.

Due to its World War I setting, Wonder Woman is often as much of a period piece as it is a superhero film. This works to its advantage, as too many recent blockbusters have been set in interchangeable dystopias, which tend to blend together in their hellish visions of a not-too-distant future. By comparison, Diana’s efforts to stop the Great War provide a sense of hope not present in films like Man of Steel or Batman v Superman, while also taking the superhero genre out of an urban environment and contrasting Diana’s supernatural powers against early 20th century firepower and chemical weapons.

The casting here is excellent. Gal Gadot plays a great Wonder Woman, investing the character with just the right balance of toughness and incredulity at her new surroundings. And the ensemble cast, which includes Robin Wright, Danny Huston, and David Thewlis, continues the DC tradition of placing gifted veteran actors in key supporting roles.

The conflict at the film’s center is a familiar standoff between good and evil (or “love and war”), and the romantic aspects occasionally become quite saccharine, but the fusion of mythological elements, period settings, comedy, and standard superhero action makes for an entertaining experience that’s more than the sum of its parts. In this sense, Wonder Woman is certainly a step in the right direction for the DC franchise, and it will likely whet audiences’ appetites for the present-day Justice League action soon to come. More notably, it serves as definitive proof that female-fronted superhero movies can be just as good as those starring men—and in the case of the DC Universe, even better.