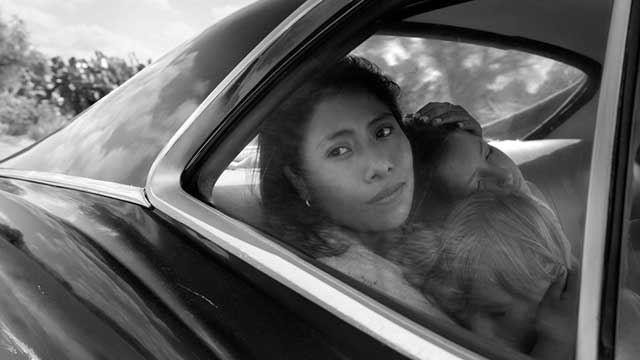 In Roma, Alfonso Cuarón (Gravity, Children of Men) writes and directs a love letter to his childhood maid and caretaker, offering a highly personal look into the life of one such domestic worker. Roma takes place during Mexico City’s turbulent the early 1970s, but chooses to tell a story through Cleo’s (Yalitza Aparicio) eyes, from her demanding job to her rare and cherished free time. Watching Roma is like watching Cleo’s life play out in real time, and only the end credits will rip you back to reality.

Every day Cleo wakes up, gets the kids ready for school, makes breakfast, and makes sure the house is spotless just in time for dinner. Working for Señora Sofía (Marina de Tavira) is a difficult job, but it also comes with a sense of security, a steady paycheck, and the love of an entire family. After becoming close with a local boy, Fermín (Jorge Antonio Guerrero), Cleo is blindsided with an unexpected pregnancy, provoking her to find support from her friends and her (working) family.

Cuarón navigates each scene with a certain elegance, providing tiny details that grant further immersion to the story. There is a sense of emotional attachment between Cuarón and Roma, and it’s easy to picture Cuarón as one of the naïve children represented in the movie, growing up in an uncertain Mexico City with only his parents and house maid to look to for guidance.

As Cleo, Aparicio treats the role with all the love and care that Cuarón intended, rising beyond the typical likable, resilient character that often inhabit tales of domestic servitude. Through masterful direction and acting, she becomes something more; a character that has the power to emotionally grip an entire room full of people, and never let go until the very end.

Halfway through the film, Cleo goes on a mission to find Fermín to share the news of her pregnancy. She finds him in the thrall of Professor Zovek, a local celebrity and strongman entertainer, giving a lesson to Fermín’s martial arts group. The men in the crowd light up with anticipation, ready to witness an amazing act of strength and deception from the great Zovek. Blindfolded, he slowly raises his arms above his head, to form a circle, and simultaneously lifts his right foot up against his left knee.

As he stands there, almost in a meditative state, the crowd begins to smirk and murmur at the pedestrian feat, until Zovek tells everyone watching to try the same. As the class and crowd of onlookers try and fail to maintain their balance, Zovek continues stands on one leg, peacefully, as does Cleo. Here Cuarón distills Cleo’s character to her essence; when the entire world seems to be spiraling out of control, she is able to block out the noise and summon a stillness that her comparably-wealthy employers can’t buy.