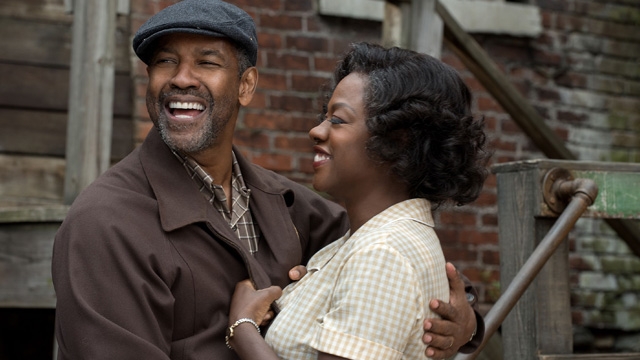 Playwright August Wilson’s Pulitzer and Tony Award-winning 1983 work Fences was one of ten entries in his “Pittsburgh Cycle,” his magnum opus chronicling the African-American experience. Denzel Washington and Viola Davis both earned Tonys for their performances in a 2010 Broadway revival of the play, and the pair reunite for this cinematic adaptation directed by Washington himself.

In 1950s Pittsburgh, Troy Maxson (Washington) struggles to provide for his family while working as a city garbage collector alongside his longtime friend and neighbor Bono (Stephen Henderson). Once a star Negro League baseball player, Troy feels slighted by the fact that he was never able to turn pro, as the color barrier was only broken after his career was over. He and his wife Rose (Davis), steadfast and loyal, are parents to Cory (Jovan Adepo), an aspiring football player who was recently offered a college scholarship. Troy also has another grown son from a previous relationship, Lyons (Russell Hornsby), who values music over steady employment -- much to the consternation of the patriarch. Rounding out the ensemble is Troy’s brother Gabe (Mykelti Williamson), who suffered brain damage during World War II that has reduced him to childlike behavior and outbursts.

Troy is an overbearing, demanding father figure, likened to a “shadow that follows you everywhere” by Cory, the target of most of his ire. Haunted by his own failures, Troy refuses to let Cory pursue football, and instead forces him to work more hours at his grocery-store job and help out with household chores. One of those chores is the building of a fence around the family’s small backyard -- a constant metaphor throughout the proceedings. Eventually, Troy’s pride and self-loathing manifests in an indefensible decision that alters the family’s dynamic forever.

Wilson, who passed away in 2005, is credited as the film’s screenwriter, and Washington has opted for a dutiful recreation of the play that offers very little artistic interpretation. With material so rich in time and place signifiers, perhaps a more audacious adaptation would have been the undoing of Fences (if it ain’t broke...). But the work seems slightly out of sync with the medium of the silver screen -- nearly every sequence is spatially limited to the family home and bursting with verbose monologues. Much of the scene blocking feels clunky or unnatural, which leaves Fences unable to shake its fundamentally stagey ambience. It’s a testament to the movie’s soaring performances that they are able to elicit interest and evoke strong emotions despite these aesthetic deficiencies.

Washington and Davis live and breathe their characters, and impressively flex their command of their craft; they match strength in both explosive arguments and unspoken resentment. Washington has captivated moviegoers for decades by playing fatally flawed avatars of masculinity, and here again he uses his domineering screen presence to his benefit. Davis, on the other hand, is stoic and centered, a pillar of feminine strength. Their shared screen time is, unsurprisingly, the most captivating part of the picture. A heartfelt turn from Henderson as the candid Bono is another bright spot.

If anyone in Hollywood has earned the latitude to indulge in a passion project like Fences, it’s Denzel Washington. The themes of racial inequality, personal failure, and familial strife that Wilson blended into his most famous work haven’t been forgotten, yet prove somewhat elusive in this adaptation, which is helmed by Washington as merely a point-and-shoot recording of several great performances. The film is an adequate replica of a great work, but is best enjoyed as an actors’ showcase as opposed to a fresh rendering of Wilson’s play.