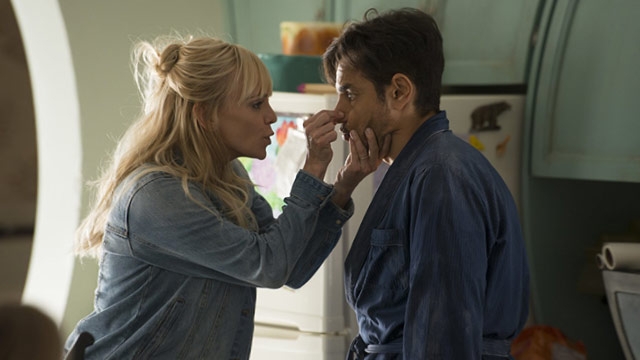 The original Overboard, starring Goldie Hawn and Kurt Russell, was released in 1987 and soon thereafter found a home on cable television. Viewers of a certain age will have seen the movie a hundred times. By no means is Overboard a great movie. In fact, it’s just barely a good movie, but it’s got that certain something, a feel-good vibe that saturates every scene and envelopes the audience. Given the special relationship viewers have with Overboard, a remake of the film must, without doubt, traffic in nostalgia. So does this new edition of Overboard deliver to those who inexplicably love the original? Let’s find out.

Overboard (2018) makes a few changes to the original story. The biggest of these is that the man, Eugenio Derbez as Leonardo, is the one with amnesia and the woman, Anna Faris as Kate, is the one who takes advantage of the situation. Leonardo is a rich, spoiled man who is an unrelenting and totally indifferent jerk. He falls into the Pacific from his enormous, magnificent, opulent yacht and wakes up on the beach without a clue as to who he is or what his life was like. Kate had an extremely unpleasant run-in with Leonardo prior to his accident so when her friend Theresa (Eva Longoria) suggests she claim she’s Leo’s wife and take him home to do the cooking and cleaning and work a construction job to pitch in on the bills, Kate figures she can give it a shot and takes Leo home from the hospital. Of course, they fall in love and Leo ends up sacrificing his wealth to be with Kate.

Eugenio Derbez is a well-established actor in Mexico and Overboard (2018) builds on his popularity there to give the film a Latin flavor. There’s lots of conversations in Spanish, with subtitles, and the soundtrack is mostly Latin songs. It’s reasonable to assume the filmmakers attempted to create a movie that could succeed among a diverse audience. Inasmuch as that was their mission, they have done an excellent job of it. One wonders why there aren’t more movies that try to do that.

Eugenio Derbez is clearly talented but Overboard is not the kind of film that gets the most out of his abilities. He just doesn’t quite fit in. While his performance itself is great, it feels like he wandered onto the wrong set. As for Anna Faris, she too does good work but seems to be too restrained. One gets the sense that she would like to cut loose but can’t. There are two surprisingly good performances from a couple of child actors who play Kate’s children. They are Payton Lepinski as Molly and Alyvia Alyn Lind as Olivia. These two kids are possessed of an exceptional comedic sensibility and steal the brief scenes they have in Overboard.

Overboard is a great family film. While it’s true that the movie doesn’t push any boundaries, it does manage to be funny without being crude or obscene. The Latin crossover aspect of Overboard is a welcome development and feels like the future. Overboard is good at what it wants to do, and that’s a lot more than can be said for many films. For a family viewing experience, Overboard will be a rewarding choice.

How to Be a Latin Lover

How to Be a Latin Lover