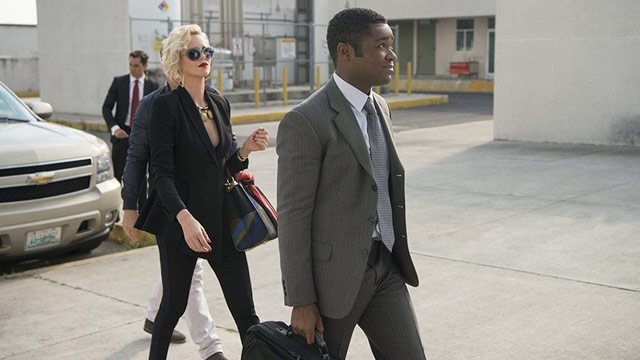 Based on its title and entertaining trailer, you’d think the experience of watching Gringo would involve kicking back with some popcorn and enjoying an action flick that has some comedy sprinkled in for good measure. And if that’s what the movie actually was, that might’ve been enough. Instead, Gringo is best described as kind of a drama with a bit of action thrown in, albeit one that isn’t worth the time it takes to sit through it.

The story follows Harold (David Oyelowo), a middle manager at a company that manufactures and sells medical-marijuana pills. The company is run by Richard Rusk (Joel Edgerton) and Elaine Markinson (Charlize Theron), and it turns out that Richard is having an affair with Harold’s wife Bonnie (Thandie Newton). The pain of his wife’s infidelity and his own financial troubles push him to take revenge on Richard by enacting a scheme to secure five million dollars at the expense of his employers. Down in Mexico, Howard plots a fake abduction to take advantage of the company’s kidnapping-insurance policy. Unfortunately, a drug cartel complicates the issue, and the rest of the movie unravels from there.

And unravel it does. This film is a sprawling mess that can’t decide on its own identity. Is it an action flick? Is it a drama? The storytelling is fractured and unnecessarily complicated, leading the audience to be uncertain of just what kind of movie they’re watching. To make matters worse, its plotting is uneconomical and its pacing is uneven, as it spends far too long inside corporate offices and not long enough on the streets of Mexico. While the actors play their parts well, even they couldn’t save this poorly written script.

At the end of the day, audiences will be left suffering through uninspired drama and waiting for the action that was promised in the trailer. If the popcorn that was thrown at the screen is any indication of what audiences will think of Gringo, there’s no sense slogging through this total misfire.