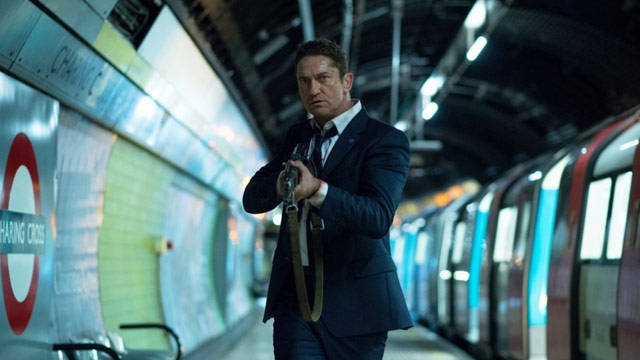 The best way to enjoy London Has Fallen, the brutal, bloody, f-bomb-rich sequel to Olympus Has Fallen, is to simply check your brain at the door and allow all of the explosions, stabbings, shootings, beatings, and instances of flag-waving to wash over you, never giving a thought to the absurdity and nastiness of it all. If you can do that, then you may actually enjoy this cliché-ridden shoot-‘em-up that plays like an ultra-violent video game come to life. Other viewers, however, may find it difficult to appreciate a movie that takes such sadistic glee in bloodletting and loss of life, and defends that carnage as a form of patriotism.

London Has Fallen begins with a U.S. drone bombing the Pakistani home of Aamir Barkawi (Alon Aboutboul), a wealthy, well-connected arms dealer who sells weapons to terrorists. We then jump ahead two years to the present day, as news reaches the White House that the British prime minister has died suddenly following routine surgery. Most of the world’s leaders, including U.S. president Benjamin Asher (Aaron Eckhart), travel to London for the funeral at St. Paul’s Cathedral. But just as Asher and his head Secret Service agent, Mike Banning (Gerard Butler), arrive at the church, all hell breaks loose. Dozens of assassins, some dressed as police officers and palace guards, open fire on the dignitaries and set off explosions around London, reducing many of the city’s iconic structures to rubble. But fear not, because even though the German, French, Italian, and Japanese heads of state are shot, blown up, and drowned, POTUS is protected by Banning, who has never met a bullet he couldn’t dodge or a bad guy he couldn’t take down with a single, hurried gunshot or a quick snap of the neck. Unfortunately, Asher is the terrorists’ main target, and the baddies aren’t going to leave London until they capture and behead him on live TV. You see, Barkawi didn’t die in the drone strike -- but his beloved daughter did. Now, he’s using all of his resources to get revenge, which must be “profound and absolute.”

One of the biggest problems with London Has Fallen is plausibility. It’s ludicrous to believe that one man could assemble such a massive force -- which includes dozens of assassins who manage to infiltrate Scotland Yard, the Queen’s Guard, and Britain’s homeland security -- and effortlessly murder a number of the world’s top leaders, all without popping up on someone’s intelligence radar. It took two years to hatch this plot, but how exactly did Barkawi know that the prime minister was going in for surgery that far in advance? We soon learn that the British leader was actually murdered by one of Barkawi’s henchmen, who made it look like he died from complications from a drug administered at the hospital. And how did the terrorists know the exact locations, including Chelsea Bridge, Westminster Abbey, and Buckingham Palace, where the Japanese and Italian prime ministers, German chancellor, and French president would be? Their assassinations in these specific locations are orchestrated with such efficiency that they would be impossible without long-range planning. Wouldn’t it have been easier to kill all of them at St. Paul’s? But then we wouldn’t get to see famous London sights go boom.

Another chief problem, aside from the shopworn script, generic direction, and forgettable characters, is Butler. He tries his best to channel his inner John McClane, but he’s no Bruce Willis: His zingers lack the latter’s smart-aleck playfulness, and he simply can’t hold the screen the way Willis, a bona fide movie star, can. He’s all grunts and groans and takes himself much too seriously, which zaps much of the fun factor; this is, after all, a popcorn flick. Thankfully, the film has the always reliable Eckhart and a stellar, if underused, supporting cast that includes Morgan Freeman, Angela Bassett, Melissa Leo, Jackie Earle Haley, Radha Mitchell, and Robert Forster. They give London Has Fallen whatever dignity it has.

Early on, Banning describes himself as being made up of “bourbon and poor choices.” After last week’s turn as a peevish god in the abysmal Gods of Egypt, and now this jingoistic misfire, could it be that Butler is actually describing himself?