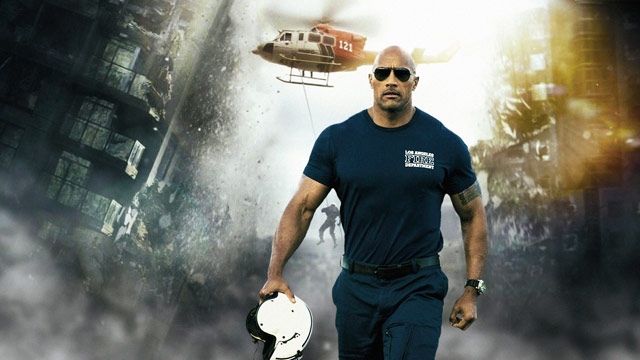 Nature begins rebelling against the state of California during the first scene of San Andreas, and she does not relent for almost two straight hours. The film itself is an onslaught of special effects, panicked citizens, and, of course, explosions. There is no subtext here: Chaos reigns supreme as rescue pilot Ray Gaines (Dwayne Johnson) tries to save his daughter from the constant barrage of mayhem brought on by a series of catastrophic earthquakes. Although it takes place in a real-life setting, San Andreas fits in the tradition of apocalyptic natural-disaster flicks like The Day After Tomorrow (2004) and 2012 (2009); it’s an unapologetically bombastic exploration of Murphy’s Law. This is a summer movie through and through, with zero subtlety and a ton of wide shots of buildings getting bashed, crashed, and mashed.

In terms of gratuitous destruction, the effects and camerawork in San Andreas are truly outstanding. Johnson may have earned top billing on the posters, but the demolition of the Bay Area takes center stage. The filmmakers clearly know what their audience are buying tickets for, and most of the movie is dominated by large structures toppling over in loud and aesthetically impressive fashion. Ray and his soon-to-be-ex Emma (Carla Gugino) journey through this calamity by land, air, and sea as they search for their daughter Blake (Alexandra Daddario).

Viewers will be mesmerized by the extreme carnage and the shots of buildings collapsing as the fault literally tears and splits the ground. Sure, it’s not so much style over substance as style instead of substance; the results, though, are certainly something to behold for anyone who craves spectacle in his or her summer cinema. A considerable amount of credit and respect should be given to the sound-effects and production-design departments, which are largely responsible for making San Andreas’ visuals a cinematic achievement.

During the dialogue-driven parts of the movie, however, the myriad special effects are not enough to overcome the lackluster character work and writing. Director Brad Peyton (previously best known for Cats & Dogs: The Revenge of Kitty Galore) will no doubt get more chances to helm blockbusters in the future, but he is clearly too preoccupied with capturing physical wreckage in this film. That’s to the detriment of the actors, who are forced to overemote in order to compensate for their characters’ lack of depth. Everything we are supposed to feel and understand about the Gaines and those in their orbit is explicitly stated, including how the death of their first daughter broke up their marriage. None of these characters have any nuance, and as a result, there’s a clear lack of authenticity in the actors’ line readings and their emotional reactions to anything that isn’t immediately hurtling at them. There’s damage to the San Fernando Valley, to be sure, but there is also a great deal of wreckage in any scene dominated by conversation. That’s especially disappointing coming from screenwriter Carlton Cuse, one of the co-creators of the masterful and thematically rich television series Lost.

The lead in this all-flash, crackerjack thriller is Johnson, whose often-wooden acting is counterbalanced by his natural charisma, earned from his time as the hugely popular professional wrestler “the Rock.” As a result, he is perfectly suited to deliver lines that wouldn’t be out of place in a high-school creative-writing course (amusingly, the camera typically zooms in on his stoic face whenever he has to say another groaner). Johnson’s presence reminds us not to take San Andreas too seriously, and to just sit back and be entertained. While he’ll never win any awards for his acting, here’s hoping that more blockbusters cast him to run around onscreen during disasters. Gugino, who worked with Johnson before in Faster and Race to Witch Mountain, does exactly what she’s expected to with her boxed-in role: scream, look scared, and shed some tears.

Alexandra Daddario is serviceable as Blake, who has clearly learned a lot from her dad about disaster scenarios and how to be prepared. The presence of Ben (Hugo Johnstone-Burt), a prospective employee at Emma’s boyfriend’s firm, gives viewers at least one fully developed character beyond the Gaines clan. Ben and his adorable younger brother/skilled wingman Ollie (Art Parkinson) are genuinely sympathetic, especially as Ben begins to fall for Blake. Johnstone-Burt and Parkinson are two bright spots here, and audiences will hopefully see more of them in future films worthy of their acting chops.

But the acting honors in this movie go to Paul Giamatti, playing a Cal Tech professor and seismology expert who frantically tries to warn California’s citizens of the impending doom heading for them. The former Oscar nominee is a pro, and he elevates every single scene he is featured in. Although the film often seems like the most expensive natural-disaster PSA of all time, his presence and commitment to craft allow the sound and fury of San Andreas to signify slightly more than nothing. Explosions become less thrilling the more viewers see them, and anyone expecting more than a sugar rush should search for other fare. As far as eye candy goes, however, San Andreas’ visuals are pretty sweet.