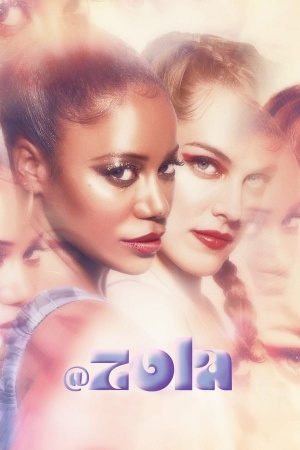 Zola is a dramedy film based on a viral series of tweets on Twitter by the character on whom the movie is based, A'Ziah King, known as Zola. When Stefani seduces Zola into joining her on a road trip to make a pile of cash stripping down in Florida, everything seems like a quirky, fantasy, get rich quick scheme. But a series of predictably unfortunate events unfolds as Stefani's darker nature is revealed, leaving Zola to figure out what she's doing there and how she can make it out.

Zola (Taylour Paige) is a waitress at a sports bar when she meets Stefani (Riley Keough). Zola is instantly intrigued by Stefani's enthusiastic over-complimenting of her, yet wary of her culturally appropriated accent. Since they both love exotic dancing and performing, it is enough to allow for a common bond.

Seemingly too soon into the friendship, Stefani invites Zola to go on a road trip to the promised land of Florida, where they could make five thousand dollars a night, stripping. Zola reluctantly agrees to go on a "hoes trip" with her newfound friend, but when Stefani arrives the next day, she's got a surprise in store for Zola. Also in the car are Stefani's jealous, milk toast boyfriend (Nicholas Braun) and a big man she says is her roommate, named only X (Colman Domingo). Stefani admits that her roommate helps to take care of her, and Zola instantly surmises that he's probably a pimp, and that the entire trip to Florida is going to involve more than stripping. But she comes along for the ride.

Along the way, they bond to a shared love of music and social media, but Zola realizes that Stefani may be much more than she first appeared to be. By the time they get to Florida, Zola can clearly see that despite her inner strength, she's going to be put to the test, even if she's enjoying it as well. But how far is Stefani willing to go? And will she cross some lines that Zola cannot?

Directed by Janicza Bravo (Lemon) Zola is both an art film and a thrill ride. Focused on the unique, strained relationship between Zola and Stefani, there's a slow unfolding and unraveling of events taking place that reveals the darker nature behind what first appears as a happy-go-lucky road trip buddy comedy. Bravo's main focus is on the strong and steadfast titular character, Zola - although Stefani's frenetic energy is impossible to ignore. Along with a host of quirky and unique individuals that round out the cast, there's constantly a little too much at work, but there is never a dull moment.

An adventure movie gone awry, Zola hits many notes well, ranging from funny to dark in a matter of moments. An undeniable force propels this thrill ride forward at every beat, toward a bleak, yet unknown destination. Like watching a train wreck, it's hard to take your eyes off the film no matter its destination.