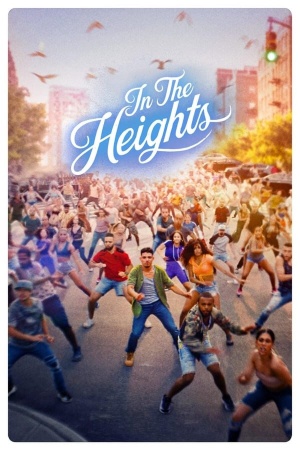 Watch or buy on:

Jon M. Chu (Crazy Rich Asians) directs In the Heights, the musical based on the Broadway play by Quiara Alegría Hudes (in her cinematic debut) and Lin-Manuel Miranda (Hamilton). Through song, dance, and some very realistic acting, the story of struggling to reach one's dreams while living in poverty is timely, poignant, and incredibly well-rendered.

Usnavi (Anthony Ramos). Benny (Corey Hawkins). Vanessa (Melissa Barrera). Nina (Leslie Grace). All four, and almost everyone around them, have El Sueñito - Little Dreams. For some, they are close. For others, they are distant or crumbling due to a belief that they are impossible or a realization that the thing they have been dreaming of isn't what their El Sueñito is. As these dreams ebb and flow, there is a blackout where they live, in Washington Heights, New York. But through it, these four and others realize that a dream is neither a promise nor a fairy tale. As a result, each must decide whether their El Sueñito is what they want or if a different dream is a truer goal for their life.

Hudes and Miranda's story is compelling and sometimes heartbreaking but never has a moment that loses the audience. From scene to scene, the story is easy to follow, and the players never become muddied with each other. Best of all, every character is believable. For anyone that has ever been in New York City, there will be people they recognize instantly, either from the street or from their friends and acquaintances. Passions, hopes, and fears are all combined into an incredible tale of not just characters but a city, a community, and a people.

Chu does a phenomenal job directing a cast of talented actors through a story that could have been overwhelming to bring to life. There is so much to this tale that is larger than itself. Still, he manages to keep it earthbound and focused first on the characters, then the larger picture of the people in general. While this is a story of individuals, the principal actors, especially Ramos, deliver such fine performances that the audience never forgets that it is just a few examples of an everyman story from the Latino community and Caribbean immigrants to the United States.

The music and dancing keep pace with the story. Despite a mixture of styles, they never get lost within each other. While some of the choreographed scenes are a little hokey, this fits in well with the theme - taking happiness where you can find it, even if exaggerated beyond its proportions on occasion. The settings join right in with the mix of colorful celebration and drab anguish, completing the picture the writers, directors, and performers are painting.

In the Heights is joyful and sorrowful, but most of all compelling and entertaining. It brings the audience into a world many have not experienced, keeping them there with passion. For everyone involved, its well-crafted implementation is a dream come true.