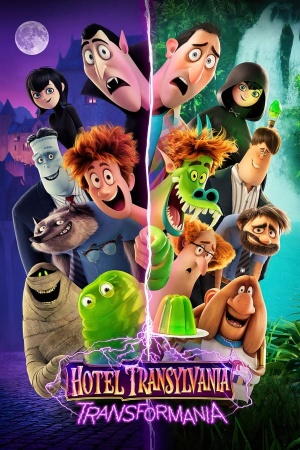 Hotel Transylvania: Transformania is the fourth and presumably final movie in the Hotel Transylvania franchise. Directed by newcomers, Jennifer Kluska and Derek Drymon, this installment in the series brings all of the original voice actors back together for another monster-filled adventure.

The film begins with a long montage of Dracula (Adam Sandler) and his daughter Mavis (Selena Gomez). The scenes show their life together throughout Mavis's childhood while Sandler sings Bill Wither's classic "Just the Two of Us." Viewers also see the hotel's early days and Mavis being a part of the endeavor since the beginning.

The montage ends with Dracula and all his pals at the 125th anniversary of his hotel. At the party, his Mavis overhears her father tell his wife Ericka Van Helsing (Kathryn Hahn) that he plans to retire and hand the hotel over to Mavis and Johnny.

Drac's impending retirement and the decision to leave the hotel to his daughter and son-in-law become the core internal conflict for the vampire. However, this internal conflict quickly leads to external conflict with Johnny, Mavis, and Ericka. When unflappable Johnny learns Drac is leaving him the hotel, he cannot contain his excitement, which worries Dracula as he imagines his hotel being turned into a hippy human spa.

Mavis' father comes up with a lie that he can only leave the hotel to a monster due to a nasty "real estate law." This drives Johnny to seek out a way around the law, and Erica's great-grandfather, the original Van Helsing, is only too happy to help.

Shenanigans with a crystal-powered ray gun follow, which leads to Johnny turning into a green dragon. Drac and his four friends, Frankenstein the creation, Wayne the werewolf, Griffin the invisible man, and Murray the mummy turn into humans. The writers, Amos Vernon, Nunzio Randazzo, and Genndy Tartakovsky (who directed the previous three films in the franchise), build in a lot of comedy during the transformations, and of course, Van Helsing's transform ray is damaged in the process.

Drac, once again, begs his friends not to tell Mavis what has happened. Tellingly, Frankenstein says they're tired of covering for him with Mavis, and audiences may feel they've seen this all before. Drac has lied to his daughter repeatedly in the series, and this escapade is just another in a long line of his keeping secrets from Mavis.

The remainder of the film features Drac and Johnny traipsing across the South American jungle in search of the cave that holds the special crystals needed for transformation. After Johnny learns how to fly and Drac realizes there is at least one benefit to being a human: eating a gooey roasted marshmallow, viewers hope that Drac has finally truly transformed into an accepting father-in-law who's ready to fully embrace eager-to-please Johnny.

In a movie franchise that's centered on the father-daughter relationship of Drac and Mavis, there seems to be a glaring issue. In Hotel Transylvania 2, Mavis and Johnny have a son, Dennis. Mavis's child is only in three scenes in the entire film, once when he sees his dad as a dragon and Drac hypnotizes him, when Mavis sees Dennis hypnotized, and in the final sixty seconds of the film when everyone comes home.

Drac's daughter is all Mavis will ever be since her and Johnny's identities as parents are never explored. She never thinks of her child or speaks of him, nor does Johnny, throughout the film. Their parenthood made for a good storyline in the second film, but now the writers have abandoned that part of their relationship entirely.

Children and fans of the film series may enjoy seeing these monsters out for one last dance, but the film ends with a shrugging of shoulders. Perhaps that is the best answer for those asking if they should see it.