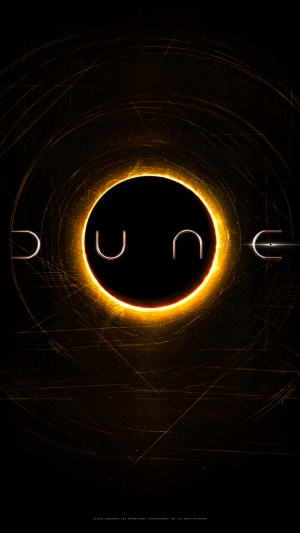 Previous attempts at bringing Frank Herbert's Dune to the screen have been highly anticipated but met with lukewarm results at best. Director Denis Villeneuve, writing with Jon Spaihts and Eric Roth, takes this to heart and presents a sweeping adaptation that will leave audiences highly anticipating the release of Part Two.

The Emperor selects House Atreides to take over operations of Arrakis, the only source of spice, a valuable resource that makes space travel possible. Duke Leto Atreides (Oscar Isaac), his son Paul (Timothée Chalamet), and their house's retainers arrive on the planet to find that House Harkonnen left equipment in disrepair. To make things worse, the world is in disarray, including strained relations with the native Fremen. Unfortunately, this is the least of Leto's worries, because a plot against his entire house is unfolding. Baron Harkonnen and the Emperor himself are determined to eliminate Atreides and solidify their hold on the spice trade. Only Paul, and the unique abilities that even he does not understand, can prevent the plot of enslaving Arrakis and subjugating the galaxy.

Villeneuve, Spaihts, and Roth are the first screenwriters to truly understand the complexity of the original story. Their deft skills give them insight into what needs to be adapted from the large manuscript to make a compelling film. They take great care to ensure the information is there without getting too bogged down in less important details. The result sometimes seems a little rushed, with the story taking precedence over character development, but all in all, it works. While these players are important, they realize that they aren't essential to the story to come. The central figures will certainly receive their due in Part Two. The only problem this causes is a lack of connection with most of the characters. As a result, many of the actors don't get to show their skills. The exception is Rebecca Ferguson's emotional performance as Lady Jessica.

Virtually every technical aspect of the film is breathtaking, creating a dense and immersive experience for audiences. Each realm is distinctly unique and whole, as are the buildings that occupy them. The spaceships and planescapes are equally breathtaking. In these, especially, the influence of H.R. Giger and Jean "Moebius" Giraud, designers in earlier attempts to bring this epic to life, can be seen. The costumes are grand and serve very well in identifying different factions amongst the many groups and families. The exceptional cinematography brings all of these together in a package that is nearly visually overwhelming. There's a constant sense of curiosity mingled with awe in every scene, which instills a sense of wonder that few films have managed to accomplish. The bow that ties this gift to science-fiction lovers together is a sweeping score from Hans Zimmer, whose choices inspire a vision of majesty, awe, and crawling fear in equal measure.

Dune Part One eliminates any speculation that Herbert's tale is too intricate to be filmed well, and is sure to inspire producers to look at other "unfilmable" properties. Villeneuve's epic-scale creation is a version of Herbert's masterpiece that will, finally, not leave audiences feeling deserted.