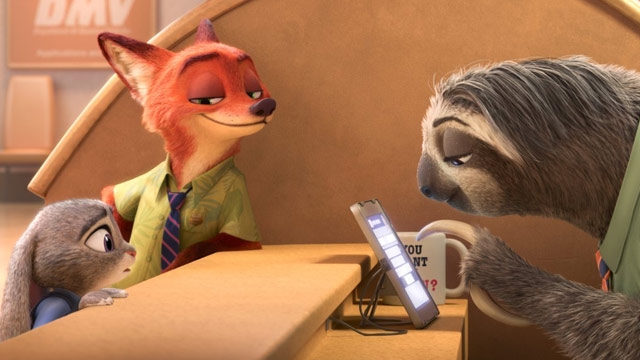 Once upon a time, as the opening sequence of Zootopia explains, herbivorous animals lived in fear of carnivorous predators. Lucky for spunky bunny Judy Hopps (voiced by Ginnifer Goodwin), she, her parents, and her multitudinous siblings live in a more enlightened age. Animals wear clothes now, as well as drive cars and carry iPhones with a little carrot logo emblazoned on the back. Her family makes a living running a farm on the rural outskirts of the metropolis Zootopia, but Judy has dreams of moving to the big city to become the first-ever rabbit police officer. Thanks to a “mammal inclusion initiative,” she’s made the token small-and-furry on a force made up of hardened hippos, tigers, and rhinos. But her dreams of dispensing justice are shaken up when she’s hoodwinked on her first day by foxy con artist Nick Wilde (Jason Bateman), who knows a dumb bunny hick when he smells one. But Judy needs his big-city street smarts to crack a crucial missing-animal case, and so the unlikely duo must work together to track down 14 creatures who have mysteriously vanished.

When Bogo (Idris Elba), the water-buffalo police chief, starts a meeting by announcing, “I’d like to acknowledge the elephant in the room,” he’s offering birthday wishes to an actual elephant. But Zootopia does acknowledge the real elephant in the room, perhaps even more bluntly than recent movies like Race or The Hateful Eight. Those films explored our own era’s racism through the scrim of the past, whereas Zootopia cloaks its jagged-edged observations in fwuffy bunny fur. Zootopia’s population is majority herbivore, but City Hall and the police force are controlled by predators. Judy winces when a leopard colleague says she’s “cute,” seizing on this teachable moment to explain that a bunny can call another bunny cute, but if you’re not a bunny…. She expresses how impressed she is with Nick Wilde’s manners by condescendingly praising him for being “articulate,” but it’s Judy’s turn to be appalled when Nick surreptitiously fondles the tuft on a sheep’s head just to see if it’s as woolly as everyone says it is. When it’s revealed that the missing-animal case is covering up a more disturbing string of law-abiding predators suddenly reverting to their savage roots, even well-intentioned Judy reveals a point-of-view that seems like sensible caution from a small mammal’s perspective, but to Nick is an unforgivable indictment of his place on the food chain. Even though Zootopia remains whimsical family entertainment and never turns into a polemic, at its core it has more in common with Animal Farm and Art Spiegelman’s graphic novel Maus than it does with other classic anthropomorphized Disney fare like Robin Hood.

Despite its pointed social commentary, this blue-chip offering from Disney is still a delightful animated family movie of the very highest quality. Everything about it is lovely, from the sherbet-colored, sun-kissed palate of Zootopian architecture; to the city’s eco-niche-specific boroughs (Little Rodentia, with its tiny cars and gerbil-wheel gyms, is particularly squee-inducing); to the intriguing but not-too-traumatizing mystery at the center of the plot; to the sly gags, including a particularly funny sequence in which Judy and Nick pay a visit to a Department of Motor Vehicles staffed entirely by sloths.

“Fun for the whole family” usually means an even mix of kid-friendly bits and winking adult jokes intended to fly over the little ones’ heads. Zootopia succeeds instead at being thought-provoking for the whole family, presenting its honest observations about prejudice, class, institutionalized racism, and urban distrust at wavelengths designed to be gently noticed by kids and sharply felt by adults. And the terrific throwaway gags help balance the movie’s thematic depth, such as a scene in which a street-corner huckster is selling bootleg DVDs with animal-themed parody titles like Big Hippo 6 and Fifty Shades of Prey. Maybe just out of camera range he’s got a copy of Gnu the Right Thing.