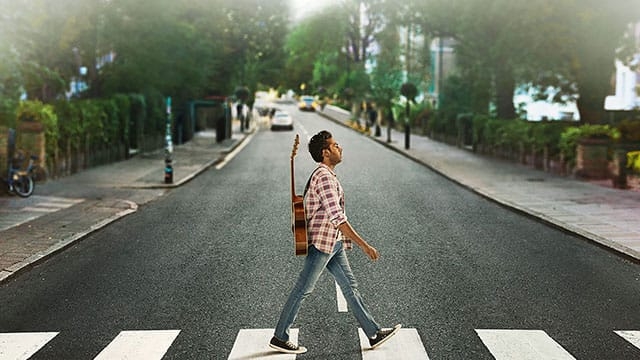 Directed by Danny Boyle (Slumdog Millionaire, 28 Days Later), Yesterday is a funny, magical love story about The Beatles, told through the high concept lens of pretending they never existed. The songs are reimagined here with energetic zeal, and the performers are all-in to create a sweet spectacle.

Jack Malik (Himesh Patel) is a musician who has much more of a self-absorbed drive to succeed than pure musical talent. His few fans have dwindled, and he may have to go back to teaching if he’s not able to make it in the music business. His manager, chauffeur, and friend-zoned bestie, Ellie Appleton (Lily James), is Jack’s number one fan – way past the point of reason.  Her unrequited love for Jack is obvious to everyone but him.

As Jack muses to Ellie that it will take a miracle to save his musical career, he bikes off for the night and is struck by a truck during a power outage. While not fatal, the convergence of these events might cause anyone else to forget about making it big in the music industry. But not Jack. When Jack realizes that only he knows scores of popular songs that have already proven to be number one hits, he uses his newly discovered powers of songwriting to get famous overnight and make a bunch of money. But when he’s tempted to sign a deal with a devilish recording executive (Kate McKinnon) and is promised wealth beyond imagination, Jack realizes that there’s more to life than being rich and famous.

Ed Sheeran makes a nice cameo playing himself as he proposes a song-writing contest between Jack and himself, to test the new songwriter. Although Sheeran proves himself as a talented musician, songwriter, and comedian, he can’t seem to beat The Beatles’ spirit coming through Jack.

Danny Boyle is completely enthused by gritty, underdog hero stories. Jack’s rise from obscurity to stardom is a familiar premise and is expertly handled here. Boyle brings out the best in his talented, charming leads.

Screenwriter Richard Curtis (Love Actually) invents a clever premise and saturates the film with Beatles references to keep superfans happy, while possibly attracting a new generation to their music. The focus is consistently centered on the charming, endearing moments between Jack and Ellie.

Yes, there are plenty of unexplained sci-fi plot holes present, but they’re not a deal-breaker for the overall package. It’s within the realm of possibility that the Beatles actually might not have been so popular outside of the cultural milieu when people went bananas over them and evolved with them over the years. But some very fine and fun performances ease these questions into obscurity. Whether or not The Beatles exist isn’t a serious question; it’s a silly premise with plenty of opportunities for laughs that are capitalized on in this film.

With some of the most iconic pop music ever written as the backdrop for this sweet and sappy love story, Yesterday is easy to like and nod along with. While it is extremely musical in nature, it’s not a musical. And no sing-along or dance number interrupts the plot, as the film simultaneously gives testimony to The Beatles’ musical phenomenon.