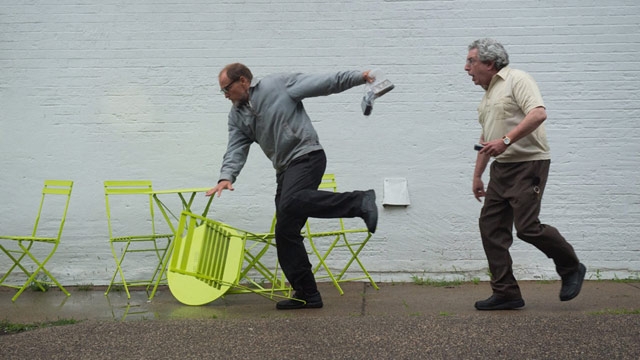 Extroverts aren’t all backslapping, sales-pitching, life-of-the-party types. Sometimes they’re people like Wilson (Woody Harrelson), the guy walking his scruffy wirehaired terrier around town and accosting people wherever he goes: at the coffee shop, at the supermarket, even standing at urinals. It’s so infuriating the way they’re always plugged into their devices when he so desperately wants to share details of his life with them, like how his father recently died, and how bankrupt and empty the Age of Snapchat is, and how every human being he meets is moronic and complacent and full of self-delusion -- present company included. He stopped fitting into the world about 17 years ago, when his mercurial wife Pippi (Laura Dern) aborted their child and ran off to Los Angeles. Since then, he’s begun acting like some rare and fragile species of jungle frog that can’t help excreting noxious irritants from its pores when abandoned in an unfamiliar environment.

Wilson is a bitter, infuriating, and utterly unsympathetic character in Daniel Clowes’ original graphic novel, but at some point between creating that book and adapting his story into this movie’s screenplay, Clowes found a way to turn Wilson’s vinegar back into wine. Part of his “likeability” (a bland and nebulous Hollywoodism that would probably make Wilson gag if he were reading this review) is the natural sunniness Woody Harrelson brings to the role, but some of it is also the slow reveal that his personality was formed by hurt, not congenital surliness. Compare him to the equally cranky and aggravating character of Greenberg (played by Ben Stiller) in Noah Baumbach’s movie of the same name, and it becomes clear that Greenberg’s bile is the result of empathy insufficiency, whereas it’s over-empathy that’s kept Wilson trapped in the amber of regret. It’s easy to understand why he never let go of his wife, or why he gets an itch to find out what happened to her. But he’s not prepared to hear her confess that she never had an abortion after all, and that their teenage daughter (Isabella Amara) is living with adoptive parents in the suburbs.

The jokes in the first half of this black comedy provoke the novel sensation of laughing out loud without feeling any joy behind each guffaw, but by the second half we come to see that Wilson’s bilious pronouncements about the world are in fact only half of his emotional spectrum: He can praise that which is miraculous and sincere and sublime with equal fervor. The movie’s plot takes some brave and unexpectedly radical turns, and the mood shifts remind one of the philosophy in Japanese architecture that footpaths cannot be perfectly straight, that there must be a wiggling digression in each one so that demons cannot follow you around the bend. And the fellow travelers on Wilson’s demon-shedding path are great, too, including always-a-treat character actors like Margo Martindale, Cheryl Hines, Judy Greer, and Lauren Weedman. Your typical romantic comedy centers on the blossoming affection between a heroine and an initially antagonistic bachelor who reveals his chivalrous depths by the end; this time around, the audience is the heroine and Wilson is our bachelor, and damned if we aren’t won over by the last reel.