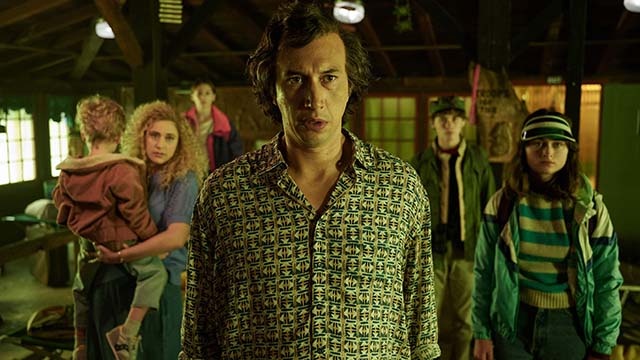 White Noise was originally a revered debut novel by Don DeLillo, published in 1985. Even at the time, the novel was acclaimed as genius as well as difficult, and the same thing can be said of this movie adaptation, directed by Noah Baumbach (The Squid and the Whale). It stars Adam Driver (House of Gucci), Greta Gerwig (Little Women), Raffey Cassidy (The Other Lamb), Don Cheadle (Hotel Rwanda), and Sam Nivola.

In White Noise, college professor Jack Gladney (Driver), and his family deal with the banal struggles of daily life before grappling with an “Airborne Toxic Event.” As the noxious black cloud grows and floats over their hometown, they are forced to evacuate. Frightened, and with too much time to think as they are stuck in traffic, they navigate through their emotions and through this horrible event. Jack’s wife Babette (Gerwig) is distraught. Daughter Denise (Cassidy) has a perpetual furrow in her brow from worry. And older son Heinrich (Nivola) over-analyzes everything.

With the ominous cloud surrounding them, the tension rises and brings forth many questions: some existential, some literal. What would moviegoers do if they were in the characters’ situations? Does the white noise of everyday life block out unimportant issues or does it sedate the critical ones? Will the family make it out alive? Why are they talking about sheep eyelashes? On the heels of a worldwide pandemic, a massive incident like the “Airborne Toxic Event” doesn’t seem so far-fetched.

The universal themes of death, materialism, overmedication, and the fear of technological advancement are as relevant now as they were thirty years ago. White Noise tackles these themes with humor, absurdity, and heart.

Adam Driver’s portrayal of Jack Gladney is excellent. He delivers his lines with perfect timing, executing the wit and dry humor with expertise. Jack’s panic is genuine. His confusion is felt through the film. Gerwig and Driver have great chemistry. Alongside Driver’s dry delivery, Gerwig’s emotional performance pops on the screen. Also noteworthy, Sam Nivola does an fine job delivering Heinrich’s long, rambling lines.

Films like White Noise are similar to movies like Lucky Number Slevin, TV shows like Gilmore Girls, and books like The Princess Bride. Witty dialogue is delivered quickly. Characters are verbose and intelligent. Every other line is one to ponder as they offer thoughtful insight and an analysis of the human existence. While some may find this fast-talking writing style to be entertaining, others may consider it to be unrealistic. But while that may be more of an issue with shows rooted firmly in reality, the absurdity of White Noise lends itself to this style of witty banter.

The first and second acts of the film move quickly. The dialogue helps with the pacing, maintaining audiences’ engagement (though sometimes it may be a struggle to keep up). However, the slow and uncoordinated pacing of the third act is amplified by long monologues, despite the excitement of the climax.

If audiences can let go of expectations and allow themselves to be engulfed by the film, they will find themselves with a movie they can watch over and over again. There is so much packed into 136 minutes, it can be easy to miss the little things. Baumbach took a risk in directing a movie adaptation of a book which was considered to be “unfilmable.” Fans of the novel and of existential, thought-provoking films will enjoy this quirky movie.