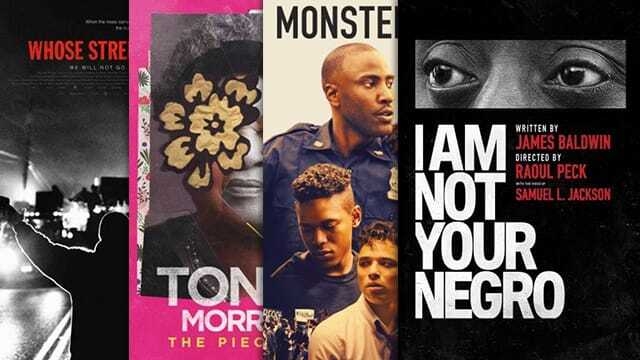 By Chris Steffen
In the midst of the current surge of activism and demands for change regarding police brutality and systemic racism, many streaming platforms have put a spotlight on features and documentaries that both illuminate and celebrate the black experience. Several services have dropped their paywall restrictions for these films, and we took stock of what's available and where to find it.

The Criterion Channel
The Criterion Channel has made a selection of films available for free that depict the efforts of civil rights leaders and the works of pioneering black filmmakers. From Agnès Varda's look into the Black Panthers protesting the arrest of Huey P. Newton to the works of contemporary director Khalik Allah (whose acclaimed 2018 feature Black Mother is available for free), there's a wide range of stories and analysis to be found here.

Amazon Prime Video
Amazon has compiled a number of relevant films on their platform, notably streaming for free last year's Michael B. Jordan, Jamie Foxx, and Brie Larson drama Just Mercy. Other noteworthy titles available to those with a Prime account include Raoul Peck's excellent documentary I Am Not Your Negro, about writer and activist James Baldwin, Ken Burns' documentary about the Central Park Five, and Marshall, a Chadwick Boseman-starring film based on the early days of future Supreme Court Justice Thurgood Marshall.

Hulu
Hulu has some excellent films in its catalog, including Barry Jenkins' adaptation of James Baldwin's If Beale Street Could Talk, Boots Riley's wild anti-capitalist satire Sorry to Bother You, and Monsters and Men, about the ripple effect caused by a black man's death at the hands of the police. They also feature last year's Toni Morrison documentary, The Pieces I Am, and the incendiary, activism-minded documentary Whose Streets?, about the rallies in Ferguson, Missouri, sparked by Michael Brown's killing in 2014.

Vudu
Vudu is also streaming Just Mercy available for free, along with Ava Duvernay's film Selma, about the 1965 voting rights marches (which Paramount has made available for free on all rental platforms), and the Denzel Washington-directed Antwone Fisher, about a young man who was let down from an early age by many of America's institutions and has to rebuild his life.

Tubi
Lastly, free streaming service Tubi has Black Panther director Ryan Coogler's directorial debut, Fruitvale Station, in which Michael B. Jordan plays Oscar Grant, who was killed by transit police in Oakland in 2009. Tubi also has a documentary about the tragedy of 14-year-old Emmett Till, whose particularly brutal murder became a catalyst for the civil rights movement back in 1955.