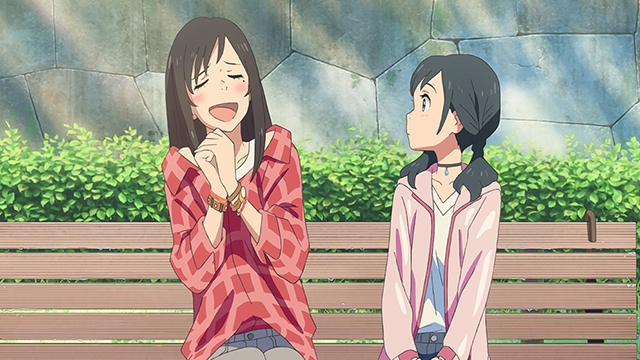 By Travis Norris
Director Makoto Shinkai's latest animated adventure is full of fantasy, drama, and wonder. Unfortunately, the beautiful animation style and charming tale of the Sunshine Girl are not enough to overcome its nonsensical pacing and abrupt storytelling. Weathering with You is a difficult nut to crack, as the expressive Japanese anime is put together with the utmost care, which quite honestly, allows it to progress. There are many moments in the movie when the animation could have carried a scene, only to be interrupted by poorly written dialog and over-the-top contortion. Shinkai's obvious commentary on climate change and the effects of natural disasters are well received, as he is able to get his message across without being pretentious. There is a semblance of genius hidden inside the bloated Weathering with You, but when it all comes together in a full package, the film ends up being passable, nothing more.

Runaway teen, Hodaka (voiced by Kotaro Daigo), finds himself in the midst of a rain-stricken Tokyo, homeless and jobless, looking for any type of work. After meeting the eccentric tabloid author, Suga (voiced by Shun Oguri), Hodaka is able to find a job researching and writing about local urban legends. His trail leads him to Hina (voiced by Nana Mori), who is dubbed "The Sunshine Girl." Nina has the amazing power to clear up areas of the sky, if only for a few hours, through concentration and prayer. Hodaka conjures up a plan to charge people for her services, as the citizens of Tokyo are now desperate for the rain to stop. As Hina clears up the sky for farmers' markets, fireworks, and sporting events, she becomes a household name in Japan.

The premise here is simple, yet Shinkai tells Hina's story in the most fragmented of ways. Many plot points just "appear" without much build up or development. As a result, the characters are not properly developed, and the film is difficult to grasp. That is not to say that the plot is overly complex, because it is not; there are just many head-scratching decisions made. The animation is so breathtaking and well-done, that Weathering with You may have been better told through its visuals and catchy score. There are some scenes that look so perfect, you have to remind yourself that this is an animated film. From the countless weather effects to the small glimmers of sun peeking through the clouds, the film shines through as a true achievement in animation.

But therein lies the problem with Shinkai's animated feature, as it contains wasted potential. Despite near-perfect animation, the story is unbelievably fractured. With a 102-minute runtime, Weathering with You is an internally polarizing film that will attract fans of the genre, who will enjoy the art and the alluring soundtrack, but it will leave many movie-goers unmoved.