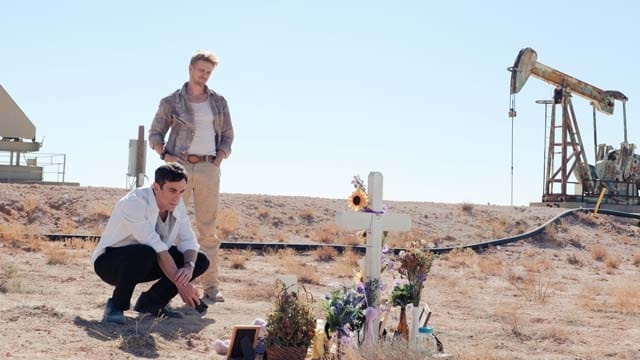 If an audience missed The Premise, created and directed by B.J. Novak in 2021, they might be surprised at the genius of
Vengeance. He proves his triple threat skills as a writer, director, and actor with this, his debut feature. In his carefully crafted hands, this detective story cajoles audiences into laughter while simultaneously shining a light on them and their distinctly human flaws. B.J. Novak plays Ben Manalowitz, a cocky New Yorker addicted to social media and the women on it. When his phone pings in the movie's opening and a mysterious voice informs him of his girlfriend’s passing, he truly doesn’t know which girlfriend. He’s that guy, and B.J. manages to play the role with charm and deprecation, so the audience doesn’t entirely hate him. The voice tells him that he has to go to her funeral, and he finds himself in Texas, delivering the eulogy.

The movie is a detective story, and Ben becomes slightly obsessed with the dead girl’s family, played by a stellar ensemble of heavy-hitting character actors J. Smith Cameron (Succession), Dove Cameron (Hairspray), Isabella Amara (Euphoria), and Boyd Holbrook (Narcos). Ben makes it his mission to find out who the killer is. He dives deeply into her socials with the help of an influencer friend (the dynamic Issa Rae of Insecure), who runs a podcast. Meanwhile, the voice of the girl’s brother eggs Ben on, trying to get him to enact vengeance on the killer or killers that Ben is trying to track down. One of the film's finest moments is when Ben meets up with a glossy music producer played by Ashton Kutcher, who arguably gives the best performance of his career.

An audience can only hope that this is the first film in a long directorial career for B.J. Novak, who seems to have a lot to say. It is a funny, sharp detective story and a murder mystery with plenty of twists and turns. But right when the audience thinks they know everything, they are dead wrong. Even more than a great comedy, which it is, it is a commentary on current times and society at large. That is where its genius lies and what B.J. Novak is so good at; he can shine a light on the faults of humanity while making his leading man (in this case, himself) shoulder the blame. The movie clocks in at a lightning one hour and thirty-four minutes and is worth every moment in that dark theater.