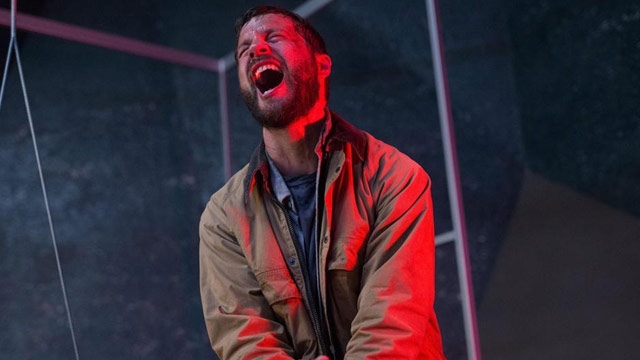 Leigh Whannell, co-creator of the Saw franchise, wrote and directed Upgrade. The movie inhabits a near-future world in which the Technological Singularity is in its infancy. Whannell’s highly-stylized vision of this near-future cityscape is fascinating. In it, technology has invaded every aspect of life. Cars drive themselves, and people talk to their cars. Robotic arms, sterile and detached from any semblance of a body, hiss quietly while handing over a glass of protein shake or delivering shots of medicine.

Grey Trace (Logan Marshall-Green) is introduced as the kind of man who likes to work with his hands, to tinker with mechanical machines that can operate without the use of digital technology. He’s a car mechanic in a world that’s come to rely on self-driving cars that shuttle people to and from their smart homes—abodes that automatically greet residents with playlists when they come home.

Grey’s aversion towards technology is vindicated. After the car that he and his wife were in took a wrong turn and crashed in a dangerous part of town, a band of thugs drag them out of the car. Grey and his wife are shot, leaving his wife dead and him quadriplegic. Eron (Harrison Gilbertson), a client whom he had restored a vintage muscle car for, offers him a way to walk again—an experimental implant called Stem. The implant is a computer chip that’s driven by an artificial intelligence program (voiced by Simon Maiden), and it serves as a conduit that enables Grey to move his body. Once implanted, he regains full use of his body and starts hunting down the men who killed his wife and unravels an interesting conspiracy.

The conspiracy plays out just a touch too slowly though, and some viewers might feel that too much time is spent belaboring the emotional and psychological pain that Grey suffers. Luckily, the well-choreographed action sequences are awesome to watch. Cinematographer Stefan Duscio does a great job with fresh camerawork during the fight sequences, showing us the whip-fast moves that Stem pulls off. The choreography is great too, with Grey’s uber-precise movements matching the kind of exacting motions that one might expect from a computer.

Then there’s the distinct visual feel. Instead of relying on technological widgets, Whannell injects the movie with vibrant lighting and contrasting colors that create a harsh neon look. The world also has a gritty feel to it, bringing to mind the cyberpunk-ish backdrop of Final Cut. All that coupled with a score that makes good use of the distinct vibrato of a synthesizer, the film excels at insinuating that digital energy is creeping into the parts of the city that are still analog.

While the movie isn’t as deep-reaching or cerebral as Ex Machina, its concepts are grounded and accessible to most audiences, and it’s thoroughly entertaining. It’s well worth a watch.