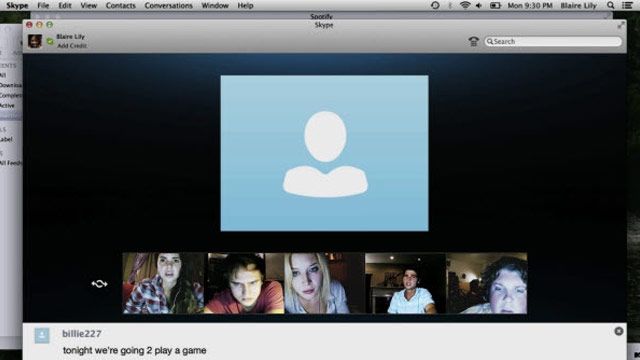 These early months of 2015 have been a breath of fresh air for horror fans. David Robert Mitchell’s spine-tingling It Follows was rapidly expanded to a wide theatrical release and has garnered near-universal acclaim. Industry luminary Guillermo del Toro has set an October release date for his new vehicle Crimson Peak. For a genre that recently has relied on tired gimmicks and subpar acting, the bar has been set particularly high early on in the year, and Unfriended only raises those stakes. From director Levan Gabriadze and writer Nelson Greaves comes a truly striking 21st century thriller.

The entire film takes place on the laptop screen of Blaire Lily (Shelley Hennig) on the one-year anniversary of the suicide of classmate Laura Barnes (Heather Sossaman). An embarrassing video of Laura drunk and passed out had been anonymously posted across the Internet, making her a target of malicious cyberbullying that drove her to take her own life. Blaire logs on to video chat with her boyfriend Mitch (Moses Jacob Storm) and their friends Adam (Will Peltz), Jess (Renee Olstead), Val (Courtney Halverson), and Ken (Jacob Wysocki). The group soon realizes that their genial Skype chat has an uninvited guest, and despite multiple attempts to hang up and call each other back, the account persists. The teens begin to get mysterious messages, including ones sent from the Facebook account of the deceased Laura.

What ensues is a delirium of technology-rooted terror. The supernatural force using Laura’s account has unnerving control of the teens’ laptops, and promises to murder their friends if they sign off or hang up on the video chat. As Blaire and the teens frantically try to rid the spirit from their computers and phones, a deadly cat-and-mouse game begins. The spirit unearths secrets and betrayals amongst the clique as it searches for the identity of the anonymous video poster that drove Laura to suicide. The teens are eventually torn apart by disloyalty, and the spirit begins taking them down one by one.

While the premise of a vengeful spirit is nothing original, the execution of Unfriended is remarkable. Gabriadze and Greaves have honed in on the nuances that define the millennial generation. Viewers get an over-the-shoulder view of Blaire’s internet life—constant multitasking and electronic stimulation. The group operates amidst a cacophony of noise; video chats, iTunes blaring, instant messaging, shopping and surfing the web.

This filmmaking approach could have easily been a disaster if not for the authenticity that Gabriadze brings to the film. The brand names are all there; Facebook, Instagram, Skype, Google, Spotify, amid an uncountable number of other touches of realism. The pings of iMessages sent from Laura’s possessed account become the jump-scares of Unfriended; blips scattered among a deafening silence that permeates more of the film than expected. Viewers are less inclined to root for anyone as the supernatural force delves deeper into the salacious history of the teens and the downright awful things they’ve done to each other, all of which is encapsulated online.

Still, Unfriended doesn’t try to be a PSA against cyberbullying, which many may think after seeing a trailer for the film. It merely flips the mirror on modern youth culture and all its idiosyncratic flaws, without tired commentary about the constantly connected generation. To really appreciate Unfriended is to be immersed in technology yourself, and to embrace the terror of a murderous spirit producing pop-up videos on your desktop and browser windows with no X in the corner.