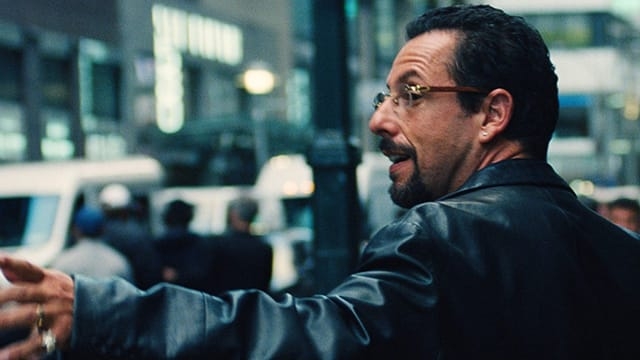 Uncut Gems is a polished though frenetic character-study drama about a New York gem dealer trying to keep his life together despite his propensity to making bad choices. A deeper look into all those shiny things that distract us, this film is itself a lovely distraction from our own lives as it homes in on the calamities surrounding a man who brings chaos with him wherever he goes.

In the recent past, a heisted rare black opal makes its way from Africa to New York, and into the hands of Howard Ratner (Adam Sandler) a scheming gem dealer in the Diamond District of Manhattan. His lavish spending habits on gambling, his coworker mistress Julia (Julia Fox), and family issues cause him to become behind on his upkeep. However, he tries to devise a clever way to pay off his bookies and finally come out ahead for once.

When professional basketball player Kevin Garnett is led into Howard's shop, he decides he must have the black opal to bring him good luck for his upcoming basketball game and trades his NBA ring as collateral. Howard immediately pawns the ring so he can bet on the game and convinces himself that he will have enough money from his winnings and the sale of the opal to solve all his financial woes. But his problems grow deeper as he tries to juggle his family life, including his rightfully suspicious wife Dinah (Idina Menzel), who can't seem to give up on him.

With an increasing lineup of enemies surrounding him, as well as both his marriage and his relationship with his girlfriend on the brink of disaster, Howard is either going to catch a lucky break or go down in a blaze of glory. He's tricky enough to outwit people on the fly, but his frantically scrambling mind struggles to formulate a plan for the long term.

Directed and written by Benny and Josh Safdie (Good Time, Daddy Long Legs), there is a careful use of larger than life, unbelievable happenstance at work, in Uncut Gems. They make use of a David Mamet style of drama here, asking what more could possibly go wrong as they compile woes onto their characters, and they continuously up the stakes until something is ready to burst.

Cinematographer Darius Khondji (Midnight in Paris, Se7en) starts the roller coaster ride from moment one, diving into the Ethiopian mines and never letting go for the remainder of the film. He adds a 'Bourne Identity' action quality to a drama, which for the quick pacing of the story, works well here.

Overall, Uncut Gems is a finely produced and well thought out movie, filled with great performances across the board. Both entertaining and insightful, it's a delight to see Adam Sandler put his talents to good use while the entire cast is fueled by energy and enthusiasm.