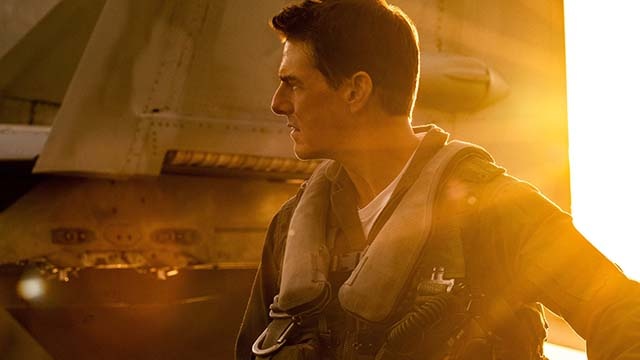 Maverick (Tom Cruise) is back in the pilot’s seat in the Top Gun film bearing his nickname. This time Joseph Kosinski (Oblivion) takes over directing the Peter Craig (The Batman) script. While the film features many new pilot characters, the audience needs to strap in for an experience that pays tribute to and exceeds the original Top Gun.

Pete “Maverick” Mitchell faces the end of his naval military career, having disrespected authority one too many times. Luckily for him, he still has a guardian angel in Admiral Tom “Iceman” Kazansky (Val Kilmer). Kazansky believes that Maverick is the only man alive who can train a new generation of top gun pilots for what would otherwise be a suicide mission to destroy a remote military facility. Admiral Simpson (Jon Hamm) believes otherwise, recognizing that the mission is more likely to succeed with “acceptable losses.” Added to this pressure, Maverick finds that one of the twelve pilots is the son of his old partner, Goose. Maverick must overcome the interference of the admiral and his guilt over Goose’s death to have any chance of completing the mission with no casualties.

Both Craig and Kosinski paid very close attention to the characters in the original and worked hard to respect them. They took the source material and expanded on it, even including the admiral’s daughter, portrayed by Jennifer Connelly, as a key element to the plot. The main focus is on Maverick, but that doesn’t stop Craig from giving the background characters memorable personalities of their own. Despite several not having much screen time, each of the twelve pilots Maverick is training has a distinct, recognizable persona. Craig understands that a film shouldn’t just build a few characters but involves the creation of a completely immersive world. He also realizes that if any element fails to be authentic and genuine, it dilutes the experience. Kosinski takes this world and brings it to life in a way that is exceptional and not seen much in many of today’s films. The actors live the roles rather than play them. Miles Teller excels above even Cruise as Goose’s son – looking, acting, and even moving like him.

The cinematography is phenomenal. It should be because the actors had to sign a form stating they had no fear of flying. This “need for speed” clause was necessary because cockpit scenes were filmed in flight in actual fighter jets, which created a dizzying, thrilling, and fully immersive experience. This adds an element of reality to the film that CGI could never match. There are also callbacks in the soundtrack and a few well-placed “Easter eggs” as an homage to the first film while adding new music to keep the action and the story going.

Overall, Top Gun: Maverick “has tone” and hits the bulls-eye on all the elements that matter: acting, direction, cinematography, soundtrack, and – most importantly – a good, solid story. These combine to create a film that launches immediately and travels at supersonic speed from beginning to end.