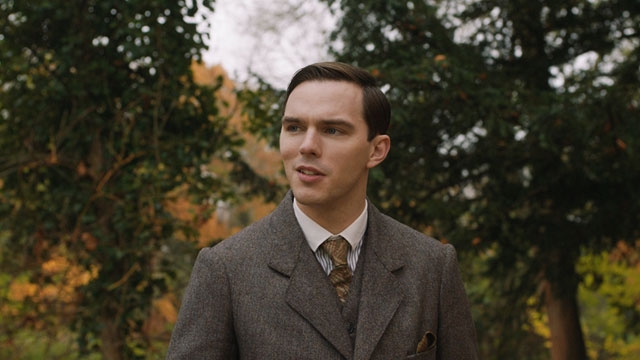 Most biopics possess the adept ability of glamorizing the best attributes of a real-life person or situation, while simultaneously sweeping their worst traits under the rug. Tolkien, directed by Dome Karukoski (Tom of Finland), treads much the same path. The mere attempt at rendering the sum-total life of writer J. R. R. Tolkien is digestible for an audience. It goes down the hatch with ease. Yet the film also tantalizes the same audience with grand questions about the purpose of art, love, and friendship during treacherous times. The basis for our love of stories such as The Hobbit and Lord of the Rings is somewhere in the bones of Tolkien.

Bright newcomer Harry Gilby and the talented Nicholas Hoult are heart-wrenching in their portrayal of Tolkien from penniless wretch to ward of a church. One moment his mother (Laura Donnelly) is performing a dramatic reading – stoking the inspiration behind Tolkien’s flair for story – and the next, she’s dead in a chair.

These grim juxtapositions are the cornerstone of telling Tolkien’s life story. The biopic is chiefly interested in his friendship with three other boys and their establishment of the Tea Club Barrovian Society as they mature from adolescence to adulthood. Weaved within that framework are gruesome images from the Battle of the Somme during World War I as Tolkien searches desperately for his friend Geoffrey (Anthony Boyle). The film ham-fists these war moments, almost to the point of absurdity. He literally plunges head-first into mustard gas and incoming fire on the frontline with neither weapon nor plan to engage the enemy. While he is kissing Edith (Lily Collins), we are suddenly transported to Tolkien while he is lying in a pool of blood surrounded by piles of dead bodies. Various scenes continue this theme, vividly comparing Tolkien’s good times and his bad.

Nuance is urgently needed in this film. Intense tonal and thematic breaks in this film are more like an iron hammer hitting you upside the head instead of the necessary invisible hand guiding you to an idea. Though the depiction in the film is sometimes banal, it still works to include how Tolkien embraced art as a way to conceptualize life. The old adage “art imitates life” springs to mind. But for Tolkien, it seems more appropriate to say, “Art is life.” Tolkien and his friends, even at their tender ages and while working in different mediums (painting, music, poetry, writing), found solace and meaning in their shared need to translate the soul into something tangible. The filmmakers deserve some credit for at least attempting to give its one female character in Edith a chance to also express her artistic desires – even if it comes to a full-stop there. Collins does more with her scant character than one might anticipate.

Even though the film lambastes us with terrifying war images, it simultaneously leads us to question how art serves a purpose even in the hellish carnage of war. Maybe the simple answer is a means of escaping. But more importantly, stories allow us to see beyond our individual selves and give us fantastical hope. That is J. R. R. Tolkien’s legacy and what he showed the world with his books, and what the filmmakers tried to portray in this film. Though the latter is less stirring, it is still a story worthy to experience.

The Hobbit: The Battle of the Five Armies—The AllMovie Review

The Hobbit: The Battle of the Five Armies—The AllMovie Review