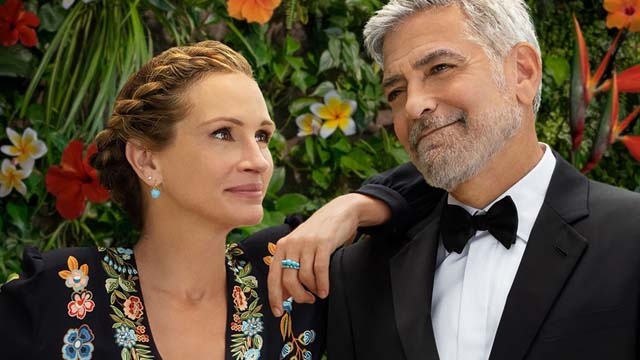 Sure to be a fun romantic comedy for some, Ticket to Paradise sets out and accomplishes exactly what it strives to do. Set in one of the most beautiful places on earth, the film shows off an ideal setting, and it boasts a star-studded cast as well. Ol Parker’s foray into the genre is well-made and mostly entertaining, but by the time the end credits roll, it is ultimately unmemorable. It feels like there is never an unforeseen moment; all the rom-com tropes and story beats are here. For a film that relies so much on an emotional gut punch, there is just no real connection to these characters.

David (George Clooney) and Georgia (Julia Roberts) hate each other. They have been divorced for 15 years, and the only thing that makes them be around each other is their daughter, Lily (Kaitlyn Dever). When they find out that Lily has gotten engaged on a whim to a man she just met in Bali, the ex-couple get on a plane and vow to break up the marriage.

Where Ticket to Paradise succeeds is in its subtle humor, mostly highlighted by Clooney and Roberts. Their chemistry on screen is as good as ever, and their little quips and jabs can hit home with so many others that are in their situation. There is charisma the duo possesses that really help move the movie along; that is something this film desperately needed. Everything else seems to be a cookie-cutter version of a movie audiences have all seen before.

Parker uses his setting to the fullest, constantly sprinkling in scenes of a sunset, or touring mesmerizing ancient temples. But when the camera zooms in, and the characters have to talk, viewers will find that they were better off looking at the Balinese oceanside. For everything wrong with “Paradise,” there is no denying that there is an audience for it. The film’s humor may be enough to carry it on its own, something that was unexpected and appreciated.

Ticket to Paradise may be an entertaining “date night” movie, but its relevance will probably end there. Carried throughout by its superstar cast, there are many moments when it almost turns a corner, only to be roped back in by the same predictable tropes. While not a full disappointment, the film never exceeds expectations either. Well-made, but ultimately forgettable, Parker’s Ticket to Paradise is destined to be another average romp through a fictional grandiose romance.