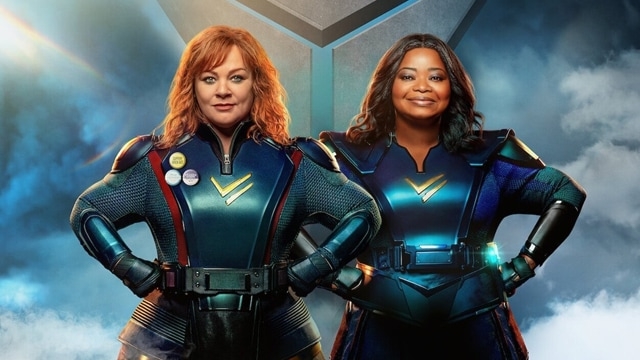 Written and directed by Ben Falcone (The Boss), Thunder Force is a comedy about two women using superpowers to take on unopposed villains. But like a bystander in a comic book, Falcone often gets in his own way when it comes to making this film a victory for the good guys.

In a world where only sociopaths have received superhuman powers, Lydia (Melissa McCarthy) and Emily (Octavia Spencer) bond as best friends after these villains, known as Miscreants, kill Emily's parents. That is until Lydia's fun-loving attitude gets in the way of Emily's plan to find a way to stop the Miscreants. After twenty years, the two reunite, and Lydia is thrust into the world of superheroism when she accidentally receives the serum developed by Emily. Now, the two must unite both their friendship and their powers to save Chicago from a team of Miscreants and henchmen bent on controlling the city.

The script is entertaining, although there are some balls dropped, and it isn't nearly as funny as the subject could have been. Falcone's writing and direction make portions of the film seem wooden. Certain aspects are predictable enough to call the script a formula rather than something original. Because of this, McCarthy and Spencer's considerable comedic talents are sometimes wasted. This doesn't mean there aren't a few laugh-out-loud moments, just not enough of them. The primary issue is that Falcone attempts to give the story more substance, including a very believable basis, but tips it a little too far towards the drama side of dramedy. Not quite far enough to give the film this classification, but far enough to make the finished product suffer.

While McCarthy and Spencer are underutilized, the same cannot be said of Jason Bateman. As The Crab, his performance is precisely the kind of over-the-top a viewer expects from a comedy of this type. Bobby Cannavale's performance as The King is adequate but often buried within the scenes by the script and overshadowed by Bateman. Falcone puts himself in the role of henchman Kenny and is entertaining because he knew exactly what he wanted out of the performance.

The film's special effects are superior for a comedy, and the soundtrack matches well - frequently adding to the humor in scenes that would otherwise be lacking. The cinematography is good – a necessity in films with action in which the audience could easily get lost.

Overall, Thunder Force is a fun but flawed film that is good for a couple of hours of entertainment. But as for creating something memorable, Falcone will have to wait for lightning to strike elsewhere.