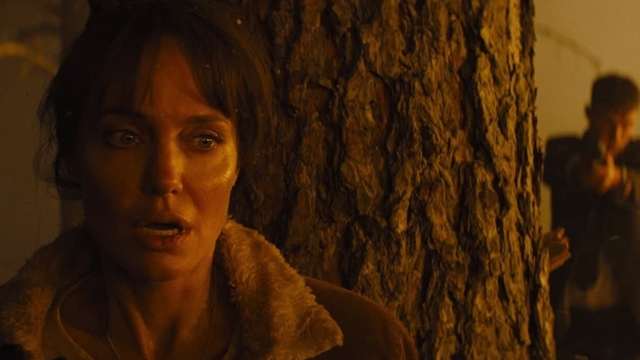 Those Who Wish Me Dead

Categorized as a neo-Western and an action thriller, director Taylor Sheridan describes his film Those Who Wish Me Dead as a combination of three storylines: a survival story, a coming-of-age story, and a redemption story. The film starts off with dramatic score that draws viewers into the film in its first seconds. Then, frantic cuts. A failed parachute. A blazing forest fire. Screaming. Running. A man emblazoned by furious orange flames on his back.

These are the horrific memories that jolt Hannah Faber (Angelina Jolie) out of her sleep. She’s a smokejumper—an elite wildland firefighter who responds to forest fires swiftly by leaping into the emblazoned area via parachute. It’s a job that’s well-suited to thrill seekers, and an intriguing occupation as well. Operating in the forests of Montana, she’s the jaunty boss of her unit. Viewers then meet the town sheriff, Ethan Sawyer (Jon Bernthal), who chastises her daredevil ways.

On the way to Montana are also Jack (Aiden Gillen) and Patrick Blackwell (Nicholas Hoult), a father-son assassin duo. They’re hunting down Owen Casserly, a forensic accountant who’s got the dirt on some bad, powerful people. Casserly, who is friends with Sawyer the sheriff, races off with his son Connor (Finn Little).

The film sends the characters on their way, and the way that they converge is not only entertaining, but quite a narrative feat. While many movies only attempt to follow the paths of a handful of characters, Sheridan’s script propels each of the characters toward each other in a lucid and believable way.

The film succeeds in other areas too. There aren’t any moments that feel like mere exposition. Sheridan also takes the forests of Montana and makes the setting a crucial part of the story. The perils of Mother Nature—searing bolts of lightning in clear fields, the skies bleeding orange from the looming flames of a forest fire—are brought alive in the film.

While the film does succeed in many ways, though there are some missed opportunities to make a deeper connection with some characters. Hannah’s job as a smokejumper is rather intriguing, but the story doesn’t quite explore the impact. Throughout the movie, Hannah doesn’t quite get the opportunities to demonstrate her unique skillset unlike the assassins or the sheriff, each with their own skills. The assassins rely on teamwork and their proficiency with assault weapons, and the sheriff is given a chance to apply his tracking skills. In contrast, Hannah neither fights fires nor jumps out of a plane. The film also fails to highlight what makes smokejumpers elite, which in turn would justify Hannah’s cockiness.

Still, these missed opportunities don’t detract from the core of the film. Sheridan succeeds in keeping the conflicts and dangers at the forefront, as any good action movie does. And the cast of actors deliver a successful performance. Jolie gives depth to her character’s thrill-seeking cockiness by portraying an almost motherly protectiveness and sensitivity. Jon Bernthal and Medina Senghore, who plays Sawyer’s wife, jibe well together and bring believable chemistry to the screen.

Altogether, with a triangular hunter-hunted dynamic and firefights that punctuate a heated chase with a wildfire as a backdrop, Those Who Wish Me Dead is relatively fresh and certainly entertaining.