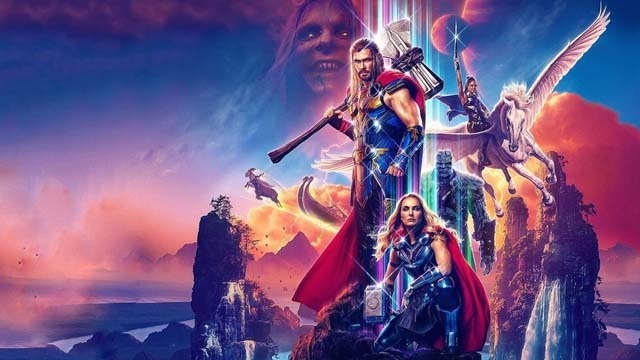 Taika Waititi (Jojo Rabbit) directs, co-writes (with Jennifer Kaytin Robinson), and has a starring role in Thor: Love and Thunder. But the script is thin, too familiar, and excessively campy, which causes the film to suffer before getting to anything of substance.

Thor (Chris Hemsworth) has been traveling with the Guardians of the Galaxy, distributing equal parts of havoc and heroism as they save the universe from evil, one planet at a time. But when Asgard is threatened, they part ways, and Thor heads home. When he arrives, he discovers that Asgard is under siege from Gorr, the God Butcher (Christian Bale). Yet he is also being protected by The Mighty Thor, who turns out to be his ex-girlfriend Jane Foster (Natalie Portman). Now, the two must unite with King Valkyrie (Tessa Thompson) to prevent the destruction of every god in the universe.

Waititi and Robinson dropped the ball on this one, delivering two acts that take high camp to a new low. The jokes are amusing at first but become forced even before Thor parts ways with the Guardians; they only go downhill from there. As the movie progresses, some of the repetitive attempts at humor become annoying. This detracts from the story because the audience is waiting for the next cringe-worthy line rather than becoming engaged with the characters. There is some redemption in the strength of both Portman and Thompson’s underutilized characters. More salvation comes in the third act as the characters get down to business. These scenes are driven primarily by an exceptional performance from Bale, who owns his character like it is a part of his soul. Even with this, the ending is watered down, predictable, and unsatisfying, leaving questions about whether any of these characters think things through – or, more specifically, whether the writers did.

Still, the epic battle scenes are spectacular, if sometimes difficult to follow. This is a side effect of a more significant issue that occurs regularly: wide, expansive scenes that are too short for the audience to take in the full scope. They’re beautifully rendered, or at least what the viewer gets to see of them. The same applies to the background characters, a creative mix of special make-up and CGI.

Thor: Love and Thunder is sometimes entertaining but suffers under the weight of trying. It tries too hard to make Thor a combination of heroic and himbo; it tries too hard to present strong female leads; and it tries too hard to tell the same, overused story differently. It fails in varying degrees on all of these. The film is all rumble with very little flash of inspiration, leaving the audience out in the rain.