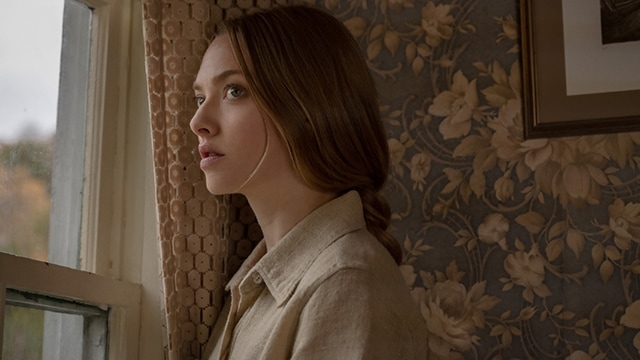 Things Heard & Seen is a two-hour long movie that comes by way of Netflix under the thriller genre. It’s based on the novel “All Things Cease to Appear” by Elizabeth Brundage and was adapted into a screenplay by Shari Springer Berman, who also directs it alongside Robert Pulcini.

The movie’s opening credits draw viewers in with a series of paintings that are projected as a slideshow in a classroom before they’re transported into a lofty aerial view of the cold, dreary countryside. It’s the winter of 1980, and a car drives up a dirt road and pulls into the garage of a modest home. The man inside the car sits there, still and appearing lost in thought. His daze is interrupted by something red and viscous plopping wetly on his windshield. It’s blood. The man looks up at the ceiling of the garage, and drops of blood splatter onto his cheek. With the nervous crescendo of violins rising, he walks into the home and sees a little girl who stands there eerily before turning to face him. The man is next seen running in the field, carrying the girl in his arms.

It’s a promising start to the movie, which centers around the marriage between George (James Norton) and Catherine (Amanda Seyfried) Claire. George, with a newly minted doctorate in art, lands himself a job as a professor at Saginaw College in upstate New York. Catherine, who also has a background in art, works as an art restorer. Together, the husband and wife—along with their daughter—move to become, as Catherine puts it, the image of the “professor with the wife with the country home.” Once the couple moves in, they being to experience a few spooky sightings, and the makings of a supernatural mystery begin to reveal themselves.

Sadly, despite its promising start, the movie fails to frighten or intrigue viewers. What is meant to be a horror/thriller about the new home’s history is instead something else entirely. The story languishes on the unraveling marriage between George and Catherine. The plot is largely driven by exposition, which is to say that Berman’s narrative choices fail to grab the audience’s attention with something more compelling like conflict or drama. The character development in the film is thin as well. Save for a few moments of spooky sightings of specters, one might see the film as a drama about marriage drama.

The movie, like many horror movies, contains threads of fascinating theories of how the supernatural interacts with the profane—that is, secular—realm of human reality. If only Bergman’s screenplay were more judicious in its focus. But as it stands, fans of horror thrillers can find movies that manage to deliver more intrigue and better frights in less time than this one takes.

The Strangers: Prey at Night

The Strangers: Prey at Night