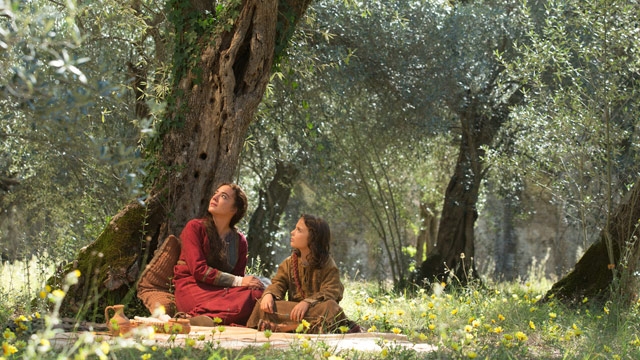 The Bible is curiously silent regarding most of Jesus’ childhood, which raises certain questions: When did he know he was God in the flesh? When did he realize he could perform miracles, such as healing the sick and raising the dead? What was he like as a kid? Director Cyrus Nowrasteh’s reverent but restrained adaptation of Anne Rice’s Christ the Lord: Out of Egypt attempts to answer these questions by focusing on Jesus as a seven-year-old boy traveling with his family from Egypt, where they have been living in exile, to Nazareth. The Young Messiah fleshes out this fascinating time in his life with great respect, but the movie ultimately disappoints because, as presented here, Jesus just isn’t that interesting as a young tyke.

The story begins with Jesus being attacked by a bully, who dies when a devilish-looking man (Rory Keenan) tosses an apple (really? the legendary forbidden fruit?) in his path, causing him to trip and strike his head on the ground. But the demon can only be seen by Jesus; the crowd, looking for someone to blame, quickly point their collective finger at Mary and Joseph’s son. Jesus then sneaks into the dead boy’s home and brings him back to life. One assumes that he performs the miraculous deed out of compassion, rather than to avert trouble for himself (which would be a theological no-no), but the film doesn’t make it clear. Soon afterward, Joseph has a dream suggesting that Herod the Great, who was planning to kill the newborn messiah, is now dead, and decides that the family should move back to Nazareth. The remainder of the movie focuses on their journey there, and then follows them to Jerusalem for the Passover.

The Young Messiah attempts to inject more drama into this story -- as if a kid slowly coming to grips with the fact that he was born of a virgin and God is his real father isn’t enough -- by introducing us to Herod Antipas (Jonathan Bailey), the lounge-lizard offspring of Herod, who now rules in his late father’s place and slinks around his occult-filled lair like a bored rock star. He gets wind that a boy was seen performing a miracle (Jesus publicly cured his ailing uncle) and dispatches a Roman centurion named Severus (Sean Bean) to kill him, just in case the messiah escaped his dad’s bloodthirsty slaughter of the innocents several years ago. However, we know his mission is doomed to fail, which zaps this story line of its intended intrigue.

British-born actor Adam Greaves-Neal stars as Jesus, and he is quite good considering what the script requires of him, which is mostly to look curious, be fun-loving, show compassion, and ask thorny questions that his parents are reluctant to answer. After all, as Mary asks Joseph, “How do we explain God to his own son?” The filmmakers, presumably to avoid controversy, have crafted a Jesus who is more adorable than authoritative. He is never allowed to display any emotion that might offend -- not even anger when he witnesses a near rape and Roman soldiers killing insurrectionists -- although the Bible clearly describes the adult Jesus getting justifiably angry on many occasions. This lack of emotional range unintentionally makes the young messiah look more like a frightened and typical seven-year-old, rather than the soon-to-be savior of the world. It doesn’t help that Greaves-Neal speaks with a proper English accent; is it really that difficult to find young Middle Eastern actors? Fortunately, the movie’s other key roles, namely Mary (Sara Lazzaro) and Joseph (Vincent Walsh), are well cast, and they are allowed to display a wide range of emotions. Lazzaro in particular is mesmerizing, and Christian McKay, playing Joseph’s brother Cleopas, brings much needed comic relief to the proceedings.

The Young Messiah will mostly be of interest to believers and their families, but parents are cautioned to take the PG-13 rating seriously. While the movie isn’t overly violent, there is a vicious stabbing, an implied near rape, and a scene in which Jesus and his family pass by dozens of crucified men that could upset younger viewers. But mostly, The Young Messiah just isn’t that interesting. Kids will be bored by it, and parents are advised to read them a good book instead.