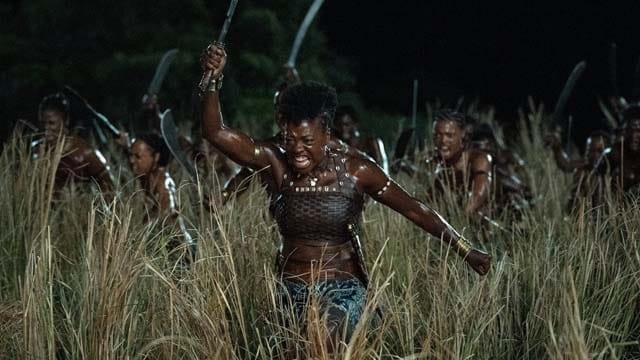 Gina Prince-Blythewood directs The Woman King, a very alternate history tale of the actual 19th Century kingdom of Dahomey. Her direction, along with a fine script from Dana Stevens and Maria Bello, brings the kingdom and the struggle for freedom from oppression and the slave trade to vivid life.

Dahomey, on the Atlantic coast of Africa, has a new ruler in King Gheza (John Boyega). He is faced with the decision of carrying on the slave-trading, tribute-paying ways of his brother or moving his people to independence from both. But first, he must balance his kingdom by selecting a female co-leader whose advice will sway that decision. General Nanisca (Viola Davis), the leader of the Agojie, Dahomey’s warrior women, is a primary choice. But faced with the immediate threat of some of her warriors being sold as slaves, Nanisca chooses her own path. With the help of Izogie (Lashana Lynch), Amenza (Sheila Atim), and new Agojie recruit Mawi (Thuso Mbedu), Nanisca sets about carving her choices for the future of herself, her people, and her nation.

Prince-Blythewood already has an impressive resume of directing strong female leads. Still, in this film, she outdoes all her prior works. In this superbly penned script by Stevens and Bello, Prince-Blythewood focuses on the women of this male-female balanced people without making the men appear to be an afterthought. This is particularly impressive in a genre that tends to go heavily in one direction or the other, especially so because the film is squarely about the Agojie female warriors. Her work is made easier by a fine cast whose performances bring the audience squarely into their journey. Davis provides a strong lead that drives the motivations of her character and of those around her. The other three principal actors strongly support her, and Lynch’s performance is scene-stealing, even against the ever-exceptional Davis. The film is not entirely without flaws, though. One character is meant to provide a positive connection between the slavers and the Dahomey. His presence seems unnecessary and more like an afterthought. In addition, some audience members may miss what the characters are saying due to the accents and the speed with which they speak. There are also a few moments in the film where the action seems to become more like a comic book movie, sometimes suspending belief in how the scene would have played out in real life. There’s a flair of fantasy here and there, which enhances the audience’s connection to the warrior women but makes some of the scenes feel less real. None of this has much of an effect on the overall experience, though.

Even among these mostly stellar other features, the cinematography stands out. Beautiful long shots, close-ups, and the use of light and shadow build not just the characters but also the world of Dahomey. Every scene is framed perfectly to convey the story and allude to hidden meaning – a solid testament to how closely and well the cinematographer and director worked together. The costuming and sets are all incredibly well done with great attention to detail.

The Woman King is an anthem to the strength an oppressed people can find and to women in general. Better, it is a testament to a balanced society that can choose a better way for itself when faced with a crossroads. In these, the movie boldly proclaims its place in amazing cinema with a mighty roar!