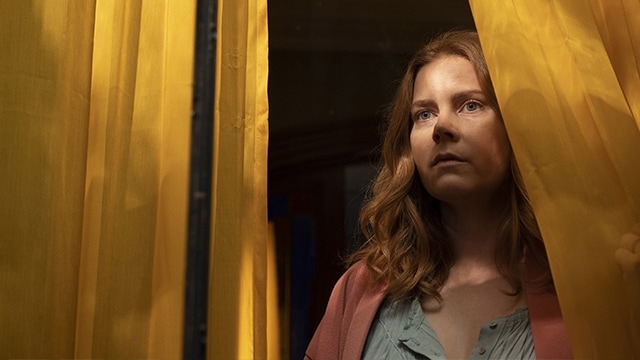 Based on A. J. Finn’s mystery novel of the same name, Tracy Letts adapts the spellbinding story for screenplay in The Woman in the Window, a thriller directed by Joe Wright (Pride & Prejudice). At the center of the drama is Anna Fox, a child psychologist who has troubles of her own, which become all too apparent even before witnessing what she believes is murder from her window across the street. As the plot thickens, there is some bumpiness along the way, but overall, the acting and cinematography are able to keep up enough to make this film suspenseful.

Dealing with agoraphobia and separation from her family, Anna Fox (Amy Adams) is confined to her spacious but aging brownstone in Manhattan, while feasting on pills and a steady diet of alcohol. Although she is regularly in contact with her own therapist and has frequent interaction with her tenant (Wyatt Russell), Anna struggles dealing with her day-to-day routine, but things go from bad to worse and from confusing to panic-stricken after she comes into contact with the Russells, her neighbors from across the street. At first it seems harmless enough, as the neighbors’ son Ethan (Fred Hechinger) drops off a gift, but after learning about potential family troubles, and then meeting his mother (Julianne Moore) who comes over for a social visit, Anna believes them to be in grave danger. But after a hysterical 911 call, detectives try to sort through the mess as Mr. Russell (Gary Oldman) shows up with them and his wife Jane (Jennifer Jason Leigh), who is not the same woman Anna Fox met. Anna’s world starts spinning faster, and she has to wonder if her hallucinations have taken control over her reality.

For viewers who prefer the film narrative light and low on complexity, this may not be the right choice. There is too much happening from the onset, and with the confusion the audience may feel like they are in the middle of one of Anna’s hallucinations. For those who like to analyze and put puzzles together, however, Wright moves the fascinating drama forward adequately, with just enough thrills and turns sprinkled around at the opportune moments. The camera work complements the story nicely, with the special effects from the dream sequences deserving special mention as they greatly enhance the setting while solving certain elements of the enigma. It does take a while to put things together and there are some lulls, but for the patient viewer it’s rewarding. Despite a few anticlimactic moments and a couple scenes that seem prolonged for no reason, the weaknesses are not overly glaring, and the acting is on point for the most part, as Adams and Oldman give very strong performances. Wyatt Russell’s portrayal of the mysterious basement tenant is also noteworthy, but it would have been nice to see more from Jennifer Jason Leigh; unfortunately, not enough was written for her character.

The Woman in the Window is a good choice for those in the mood to put together a mystery, or at least follow along as an intriguing plot develops before their eyes. It contains moments of fascination, but it is uneven and has its less entertaining moments as well. Anna’s character is not able to look away as she witnesses scenes from across the street unfold before her eyes; viewers may be occasionally tempted to look away and wish the story along, but are likely to be entertained enough until the film’s final scene.